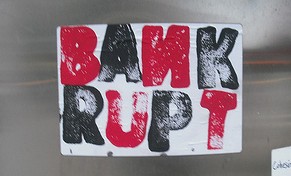 Even though we have already noted some signs of a slight economic recovery, the number of bankruptcies and outstanding debts among companies and traders in Slovakia is going up.

The Slovak Credit Bureau reported that in the first three months of this year a total of 103 bankruptcies have been registered. This translates as a 69 percent increase over the same period of last year (61 bankruptcies)

The trend from last year remains, with most bankruptcies being seen in mining, transport, warehousing and manufacturing. At the other end of the scale, the fewest number of bankruptcies were recorded in art, entertainment, recreation and real-estate. The SCB counts with about 400 bankruptcies for the whole of 2010.