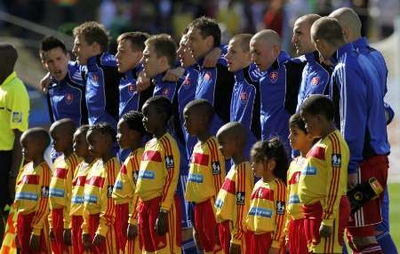 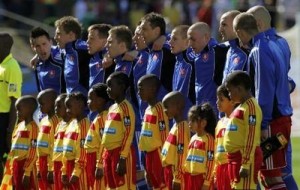 Contentment:
When Slovakia qualified for the World Cup there was a great sense of achievement; the dawning of a new era in Slovakian football. Everyone said that qualifying had been enough, that nothing more was expected of this young team. But how quickly that changed with the approach of the first game and a sure win against a little known New Zealand team.

Optimism:
A sense of the possible grew. A win, a draw and a good result against the defending champions might just be enough to put us through to the second round.

Expectation, agony, frustration:
Slovakia 1, New Zealand 1. The 93rd minute equaliser by the New Zealand team burst the optimism bubble in a most dramatic fashion. The game itself was a strange mixture of nerves and hope for me, but how bitter a pill was that goal?

More frustration, anger:
Sure Paraguay is a good team. Sure they controlled the ball well. But what was Slovakia doing for the first 91 minutes before finally getting a shot on target in the 92nd minute? It was hard to watch, to let my hopes dissolve. My frustration at the performance spilled over to anger at the attitude of the Slovakian team to the game.

Acceptance:
The mood before the Italian game was one of reflection; of what could have been. I hadn’t the courage any longer to be hopeful.

Shock, fear, anxiety, euphoria…:
Where had the Slovakian team of the first two games gone? Who had replaced the lackluster underperformers with this league of gladiators? Fight, spirit, commitment, energy, movement, TEAM! Finally a team! Not since Ireland’s participation at the ’90 World Cup (I’m Irish) have I stood through a game at home, unable to sit! Even then I don’t recall my heart racing so much and my emotions being so wildly out of control. This is football! This is Slovakian football at its best!

Renewed hope:
I can’t say that I expected the Slovakian team to beat Holland in the second round, but I believed it was possible. I felt justified in believing and a swelling sense of pride for my adopted home nation.

They didn’t let me down in what proved to be their final game of the tournament, far from it. The left me with only positive emotions to ride out this rollercoaster; pride, satisfaction, belief and hope for the future.

To the Slovak national team and coaching staff, you have my gratitude. You’ve earned the respect of the Nation. Thank you for the experience that you have made the World Cup for me.