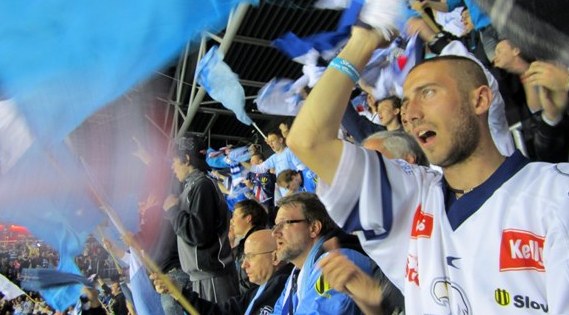 This week’s hockey match on Wednesday was, well, a winner. So adorning my team’s colors I set off to the game between Slovan and Košice. The stadium was packed and, needless to say, the crowd was excited and full of energy, but this might have had something to do with the fact that I was standing in “Tribune D”, which for those of you who don’t know is the lions’ den of the stadium, a no-go area for anyone not wearing blue and screaming for the local team.

From what I’ve been told, hockey games are usually this vibrant, but what made this match even more special was that Slovan had won 2 of 4 and Košice 3 of 4 games, meaning it was essentially the final, so should Košice win they would go onto finish as champions.

Upon arriving at the stadium, taking in the atmosphere and finding my position amongst the fans, Košice scored with 7 shots at goal, 13:15 minutes of the 1st 3rd  to go. The crowd were pretty peeved, to say the least! How could this happen?

Life went on, as the religious chants and the vibe and competitive spirit escalated, on and off the ice. Renditions of “When the saints go marching in” have never been heard in a less fitting environment, but somehow it was rather melodic.

Feeling the blow, Slovan turned up the heat, melting the ice all the way to the goal, then goal to equal the score. The crowd was ecstatic and I, being a **cez oceanka ( coming through the ocean) foreigner, felt almost lifted by the crowd as flags were waving, voices raised and echoes heard resonating the stadium, filling it with jovial cries. “ My sme Slovan! My sme tu doma!” (“We are Slovan, we are home here!”). So proud.

However, what goes up must come down, Košice with 18 shots at goal and Slovan with just 4 managed to score their 2nd goal with number 12 shooting a clear shot at goal, now with only 5 minutes of the 1st 3rd to go, so this made things a little stressful. The fans geared, the small red contingent on the other side of the stadium sounded 50-men stronger and us in Tribune D were left using fowl language and cursing certain regions of the country ( not to be taken to heart of course ). Literally with 1:50 minutes of the match to go no 7, Peter Fruhauf  of Slovan struck back with vengeance leaving the score at an even 2:2 at the break.

Getting a drink was no easy task but we eventually managed to satisfy our thirst, I was back in  all my spectating splendor.

Both teams pushing for the goal, back and forth, the puck getting flung around the ice like cash amongst Russian mafia, Eventually it was no 27 Kevin Harvey, a lefty, who struck it lucky …SLOVAN SCORE! And back to an add break. “Kaling kaka lin kakalinka liknka lin”.

Coming back in the final 3rd, after queuing for the toilets and happy to be back listening to Frank Sinatra “New York, New York” I found my place amongst the friendly high-spirited supporters, singing, drinking, cheering, drinking, cursing, drinking.

And then GOAL! Another one, no 27 doing it again. This excitement was soon disrupted after Košice revolted with fast passes and aggressive shots at goal, eventually succeeding and bringing the score to 4/3. Still, Slovan were not letting this go, their spirits would not be broken, they had eaten too many carbo-rich ‘halusky’ meals, they had come too far and I guess were just hungry for another game.

Battling it out and getting a penalty shot at goal, Slovan scored again, now sitting at 5/3 with 3 minutes of the game to go, they seemed rather proud of themselves and in a secure position to win. “Glory Glory Hallelujah” “When the saints go marching in” “I was meant for loving you” “Košice d0piche”… singing, drinking, chanting, drinking, man on a loud speaker losing his voice, drinking!

And GOAL! 6 / 3 thanks to lucky Number 13 David Buc, thanks supporters, thanks Tribune D…

Slovan came out tops this time but go on to fight, fight, fight. Last chance at striking lucky!

An experience well lived and survived, enjoyed and left amused.

I found this match to be full of camaraderie and team spirit, minimal fights, maximum goals and  besides the somewhat racist remarks all round, good clean fun, but that’s not all. The best is we get to see it all again on Saturday, this time a little differently! Slovan watch out, Košice and it’s fanatic supporters are waiting, those in blue beware!