In recent years a new flamenco generation had appeared and grown in Slovakia reaching a considerable artistic spread within both national and international flamenco activities. The band PONTE PARDO is no exception. In a well mixed eccentric drink for connoisseurs, together with their artistic guests, they bring a fresh combination of  flamenco – world – pop – jazz. 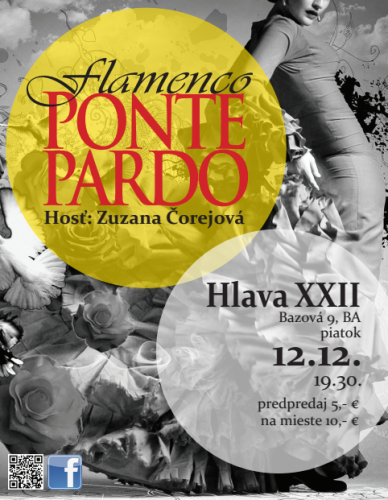 Ponte Pardo is a young pop-flamenco band of experienced and versatile artists that decided to create a soft, catchy, and slightly jazzy group of  flamenco  musicians and  friends.  It has come to light in 2010, when a flamenco guitarist  Martin  Nováček  invited  all  of  them to meet and cooperate  with the crucial decision: Let´s call ourselves Ponte Pardo 🙂

The repertoire  contains their own creation  as well as the arranged compositions of the authors:  Paco de Lucia, Vicente Amigo, Gerardo Nunez, and so forth. There are also arrangements to dance choreography with the lyrics mostly in Spanish language.  Lyrics are in Spanish, rarely in Slovak. Among many concert occasions, they got to the final in the local alternative and jazz contest and won with a song: Por.Lo.Bueno.

Characteristic feature of their music is the contrast between soft flamenco themes and the harsh folklore energy of this Andaluzia phenomenon. Ponte Pardo  participated  in  numerous  performances,  and  some  autonomous concerts.  They  had  the opportunity  to perform on different  public events  and  balls, including  Czecho-Slovakia´s  got  talent. They are on their way. The recent concert guest will be: Zuzana Čorejová Fedorová – female dance.

Ponte Pardo also participated on the opening of  Flamenco.Dance.School in Bratislava. There were plenty of such schools you could say. What is different in this case from most of others alike is the fact that it is not alike at all. The vision is to support human authenticity, playfulness and nature in flamenco or other dance on each and any of one´s rhythmic-motive levels.

With us you´ll take the road to a magical world of Andaluzian folklore and its modern stylizations in which some of you will even get to the point of ´duende´ (artist´s trance enchant) during the course. Ability to show the inner intimate world via authentic expose, preferably backed up by technical maturity takes years of training and tuning. Yet you have to start somewhere 🙂  At our creative  courses  you will meet yourselves.

Your unknown, surprising, larky, creative and passionate hidden selves. We are here for all of you that believe the life is a mystery that wants to be revealed. In rhytm of a spanish blood horse, perhaps a slightly meditative state of mind, proudly and easily will you dance out a secret, so far undiscovered piece of your soul. Gradually you will reveal flamenco cuisine interpretative mysteries, and perhaps hear of strong influence of spanish gypsy traditions on current form of this beautiful art ..