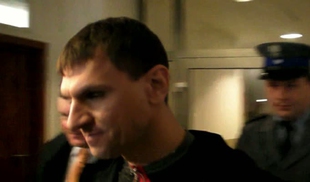 The long-hunted underworld figure and alleged murderer Karol Mello has been held in custody following a decision of the Senate at Bratislava District Court yesterday, even though his case was returned due to a procedural shortcoming in the extradition process.

Mello is up on charges of having murdered a woman and a 10-yr old boy back in 2004, after which he was hunted by Slovak police for almost five years until he was discovered living in Poland with his Slovak girlfriend in October 2010. The Polish authorities tried him first for other misdemeanours before releasing him to the Slovak authorities.

Mello pleaded to be let go with the promise that he would not leave the country, but the court turned down his plea and refused him bail. As part of his appeal, the case will now be forwarded to the Regional Court in Bratislava.

Mello was officially released yesterday only to be re-arrested by the police special unit for a different crime, just so they could keep him under lock and key.