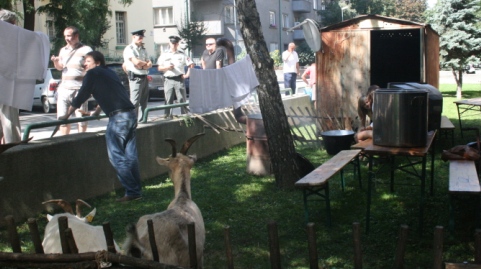 Renowned civil activist Alojz Hlina has set up camp outside the Ministry of Agriculture and Rural Development accompanied by 3 goats.

Hlina parked his porta-cabin on the small piece of greenery outside the Ministry, together with his livestock and cooking cauldron, so he can prepare food for the goats. He wants to have talks with the heads of the Association of Towns and Villages of Slovakia (ZMOS) about a project he has put together to deal with Roma issues in communities.

When asked by The Daily about how long he thought he would be squatting there with his mini farm, Mr. Hlina replied only that he was not sure, but that he was willing to stay there until his call for talks is accepted.

We also asked Mr. Hlina if there was any chance of the police evicting him from his temporary home, but all he could say was “We will see”. Just now he is being guarded by a few bemused-looking police officers.

Hlina recently involved himself in trying to resolve a conflicting situation in the regional capital Malacky west of Bratislava via the civil association called Solution for Malacky. As part of his master plan to address Roma issues, Hlina has mobilised Roma from around the country to complain to MPs about their negligence of Roma issues and problems with a mass demonstration before parliament on 14 September.