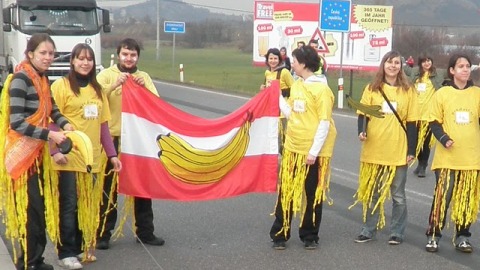 The Slovak-Austrian border at the Jarovce-Kitsee border point in Bratislava was brought to a halt today by Slovak and Czech activists.

The activists blocked the border point for about 15 minutes as part of an international campaign called Shame on Austria, while dressed in banana costumes, signifying Austria as a banana republic. They were also handing out information leaflets and bananas labelled Produce of Austria to drive the point home.

The protest was organised to draw attention to the detention of 13 animal rights activists in Austria, who have been in custody for over a year already under allegations of being part of an organised criminal group. If found guilty, they could end up spending five years in jail.

The Shame on Austria campaign was started as the prosecution of the activists is regarded as being abuse of the law, which instead of being used to combat organised crime is being applied to harass anyone opposing those in power. The campaign has already made protests at the border, most recently in November 2010.