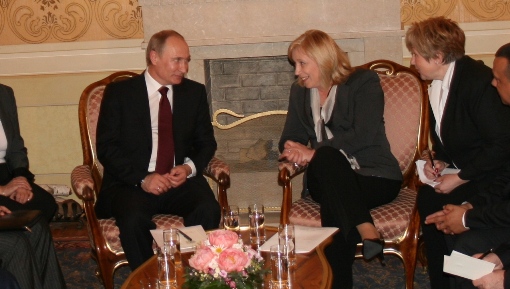 Russian PM Vladimir Putin brought some good luck with him on his visit to Slovakia today as the Congress of the International Ice hockey Federation gave the thumbs up to Russia’s bid to hold the 2016 World Championship.

Russia was the only bid in the end as both Denmark and Ukraine retracted their bids for the championships. Putin therefore arrived at the Government Office all smiles to be received by Slovak PM Iveta Radicova and a small delegation, including economy minister Juraj Miskov.

They exchanged small talk in their brief one hour meeting, but one thing Putin promised Radicova was that the natural gas crisis of January 2009 would not be repeated again. The crisis hit Central and Eastern Europe hardest as Russia turned off the taps over a dispute with Ukraine at the height of winter.

Putin’s visit came one day after PM Radicova requested him to provide Slovakia with the invitation letter based on which Russia rolled into the country with its tanks in 1968 as part of the Warsaw Pact. Putin said he would make the documents available if they existed in Moscow, informed Radicova.

Nobody has ever been held liable for the occupation of Czechoslovakia in 1968, and communist official Vasil Bilak recently escaped sentencing as Slovakia did not possess the original invitation letter that allegedly bears Bilak’s signature. Moscow previously refused to provide it to Slovakia on the grounds that it is an historic piece of heritage.

Putin was literally on a flying visit to Slovakia, arriving and leaving on the same day. Everyone thought he would go to the Orange Arena in Bratislava to watch the Russian hockey team’s semi-final match against Finland, but he flew back before it started.

Maybe Putin’s absence brought bad luck to the team, who were probably expecting him to come give his moral support and inspire them. Russia eventually lost the semi-final 3-0 to Finland, thanks also to one of the best hockey goals ever scored in the world championships, by young 19-yr old Mikael Granlund, who got 2 of the 3 goals.