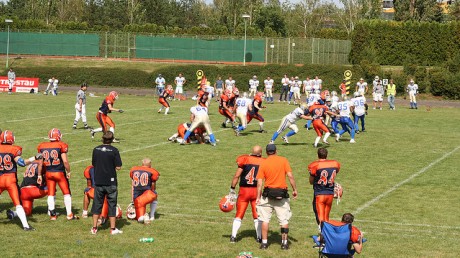 You may be thinking “Wait a minute, Bratislava has an American football team?” Indeed they do, in fact they have had one for about 16 years. It’s also gaining popularity, but it’s not easy to convince a nation of hockey and soccer lovers to embrace a new sport that isn’t immediately understandable for a first time viewer.

Even if it was immediately obvious what the rules and objectives were, it’s still difficult to pull a fan’s attention from the sports they grew up watching to a sport they have no connection to. Case in point: when the LA Galaxy brought David Beckham over from the UK in hopes of boosting popularity of professional soccer in the US. Major League Soccer thought that Americans would say “Wow cool! David Beckham is coming over! We gotta get tickets!” Instead us Americans said things more along the lines of “Who’s David Beckham? Oh, he’s a soccer player? Why is he coming here? To start a career in Acting? Music? Oh, to play soccer? Why?” In fact, I’m pretty sure that Victoria Beckham’s reality show “Coming to America” got better TV ratings than David’s games with the Galaxy.

This just proved what all sports fans already know; the integration of a sport into a given culture is a long process that requires time, patience, perseverance, and daily injections of positive attitude.   So how did American football find its way to Bratislava in the first place?

Back in the mid-1990’s Slovakia was learning to adapt to life after communism. Part of this adaptation included the airing of more and more foreign TV programs, like American football. Most Slovaks would only watch football for a few minutes before they decided that it was too slow to be exciting and then they would find something else to watch.

However, there was one Slovak man named Ludovit Galka who was intrigued by this new sport. He found it attractive but not understandable. The more he watched, the more interested he became to learn the rules. This was at a time before Google when people actually had to put up an effort to gather information, so Ludo utilized the most advanced technology of the era: a Sega Genesis and an football video game. These were the beginning stages of Slovakia’s foremost expert in American football.

One day while working at a soccer game, Ludo saw a poster that called for help in starting a football team in Bratislava. It had an Austrian phone number and Ludo called and the voice on the other end of the phone said “Finally, we put that poster up 4 years ago!” While the Austrians did offer to help Ludo set up a team in Bratislava they proposed that he set up a farm team, meaning that all of the good Slovak players would go to play in Austria and all of the sub-par Austrian players would go to Bratislava.

Not thinking this would be fair to the fans in Slovakia, Ludo rejected this proposal and said he wanted a team that could compete in the Austrian league. The Austrians agreed and told Ludo they would help provide the equipment and coaching. As it would turn out however, there was not a lot of support in the early days and Ludo had to build the football program from the ground up. Needless to say, at the beginning of the Monarchs era there were more moral victories than real victories. Over time each season was marginally better than the last and the Monarchs eventually became invited to be part of the Czech league.

Fast forward to today. The Bratislava Monarchs have players that are 10-12 year veterans, even Ludo’s son Marek is entering his 9th season. Most Americans don’t play this long unless they get recruited to play in college. The coaching staff and assistants are made up mostly of former players. Although this will be the inaugural year of the Slovak league, the Monarchs currently play in the Czech league and hold a respectable 36-20 record since 2002 and they are 11-3 in the past two years.

Here are some facts and figures about the present-day Bratislava Monarchs:

It should also be noted that these players get concussions, break bones, dislocate knees, etc and at the end there is no college scholarship waiting for them. No shoe endorsements. No Gatorade commercials. No bragging rights when rappers wear their jerseys in their music videos. They just have a love for football in their hearts and can’t get it out. The players are even in charge of renovating their stadium and that includes digging 160 meters worth of ditch to lay pipes so they have running water.

When asked about the direction he would like the Monarchs (and football in Slovakia) to go in the future, Ludo said that he would like to have a good stadium and he would like to play in a competitive Slovak league. Although every football fan in Slovakia owes Ludovit Galka a beer, he can’t make the sport grow on his own. Indeed it has been a collaboration of fans and athletes that have helped develop the team and promote the sport.

The Monarchs are always recruiting athletes. Soccer and Rugby players are encouraged to come watch practice as the sports share similar athletic attributes (although soccer players should note that you have to use your hands and that flopping on the ground and acting like you’re hurt won’t win you any sympathy from the refs, and rugby players should note that with the helmet and padding you’d better be ready to give and receive more violent hits).

The Monarchs are also always looking for position coaches, conditioning coaches, and sports medicine experts. There are also tremendous sponsorship opportunities. On behalf of Ludo and the Monarchs, I would like to invite you to come watch us in action on Saturday April 16th at 2pm as we host the Ostrava Steelers. You pay for the whole seat but you’ll only need the edge! Tickets are about €3 by the way.