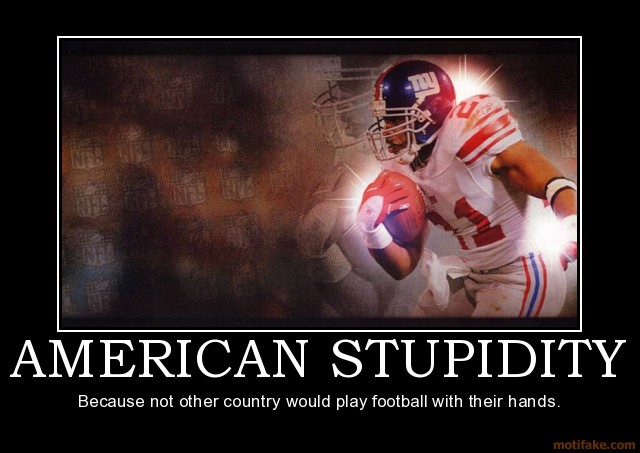 As many of The Daily readers expressed an interest in finding out more about this uniquely American sport, our expert Patrick McDaniel has put together for you this Idiots Guide to American Football. 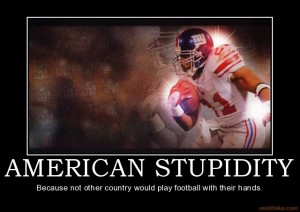 American football is a sport that is insanely popular in America, even at the college level. While sports fans in Europe have accepted it to some degree, most of the non-Americans I have met here in Bratislava tend to be very critical of the sport. They say it’s too boring, too slow, and they question the toughness of the athletes because they wear all of the pads. Although I am convinced that these harsh words criticizing my favorite sport come from hurt feelings when I say I don’t really like soccer, most people don’t like American football because they do not understand it.

Just to make it clear, Americans don’t call football football to slap the other football’s (soccer’s) fans in the face. The word soccer was actually coined by the Brits and it comes from AsSOCiation Football or SOCiety Rules Football. Far-fetched I know, but these are the same people who make up nicknames for everything. Example: Americans are seps. Why? Septic tank rhymes with yank and apparently sep is short for septic tank, because Americans are generally full of fecal matter (?). While I must concede that it makes more sense to call soccer football because you only use your feet, it is generally accepted that the name American football comes from the sport once called rugby football. Another theory is that we call it football because it’s played on foot rather than horseback. It is not important, Americans will continue to call it football and everyone else can call it American football or gridiron. Besides, handball is already taken and turbo-charged extreme god’s country slaughter death ball is too long.

Football is played on a field that is 120 yards long, that’s a 100 yard playing field and a 10 yard end zone at each end. Each team always has 11 players on the field. The object of the game is to make the football cross the goal line of the opposing team’s end zone. This is done when either a player carries the ball and runs into the end zone or a player catches the ball while already in the end zone. When this happens, it is a touchdown.

Read this paragraph carefully as it will clarify the game significantly. It’s not as complex as you think. American football does not flow like soccer or basketball. The objective is still to score however and this is done by the offense performing a sequence of various plays to march down the field and into the opponent’s end zone. Each play is called a “down”. The offense must move the ball 10 yards every 4 downs or else they have to turn the ball over to the other team. If the offense makes it 10 yards in 4 downs, they get a new 1st down and they have to move the ball another 10 yards to keep the attack going. After each play, or down, the game breaks so the offense and defense can plan their next play. Although these breaks are only about 30 seconds long, this is the part that irks the first time viewers. Lastly, since American football teams don’t wear their sponsors’ logos on their uniforms, they have many commercial breaks which cause at college or professional game to last up to 3 hours. At the amateur level games are significantly shorter.

The least you need to know about offense and scoring

Plays begin at the “line of scrimmage” which is the spot of the field where the ball is placed, usually where the player with the ball was tackled on the previous play. The “snap” is when the ball is given to the quarterback and the snap sets the play in motion. The offense has 11 players consisting of these positions:

Quarterback (1): The player who receives the snap and either throws the ball, hands it off or keeps it and runs it himself

Running backs (1-2): The players who line up beside or behind the quarterback and take the ball and run towards the end zone with it

Wide receivers (2-4): The players who run down the field and catch the ball that the quarterback throws

Linemen (5-6): The players who block for the quarterback and running backs

Each play is a running play or a passing play. The quarterback must be behind the line of scrimmage to pass forward. However, any player can pass the ball backwards to a team mate during the play.

If the offense is struggling to move the ball 10 yards and 4th down arrives, it is common that they punt the ball or try for a field goal. A punt is when the offense kicks the ball downfield to the other team so they have further to go to get to the end zone on their offensive drive. A field goal is another way to score. It is when a team is close to the opponent’s end zone and they try to kick the ball between the goal posts.

Touchdown, 6 points: Taking or catching the ball in the end zone

Point after touchdown (PAT), 1 point: After the touchdown the scoring team has the opportunity to get another point by kicking the ball between the goal posts from close range

2-point conversion, 2 points: After the touchdown, the scoring team can decide to forgo the PAT and run a running or passing play from close range for 2 points instead of 1.

Field goal, 3 points: On 4th down if the offense is close to the end zone they usually opt to try to kick the ball between the goal posts from the line of scrimmage

The least you need to know about defense

Like offense, there are also 11 players on defense. The defenses’ objective is to prevent the offense from moving the ball down the field. This is done by tackling the person with the ball (once the player with the ball hits the ground, the play is over). These are the defensive positions:

Linemen (3-4): These players try to tackle the quarterback* or the running back and also to make it difficult for the quarterback to make a good throw

Linebackers (3-4): These players stand behind the linemen and either try to rush the quarterback, tackle the running back, or even cover receivers.

Corner backs and safeties: These players, collectively known as the secondary, run with the wide receivers and try to prevent them from catching the ball

If you’re on defense and you stop the offense from going 10 yards in 4 plays, that is good. However, turnovers are better. If the quarterback throws a ball and a defender catches it, that is an interception and the team that was on defense is now on offense. If a player has the ball and drops it or has it knocked out of his hands, that is a fumble and a defensive player can recover it. If this happens, the team that was defending is now on offense. 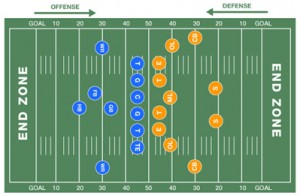 While a team’s offense and defense are on the field for most of the game, there is also a special teams unit. The special teams put the “foot” in football. At the beginning of the game and after halftime there is a kick-off where one team kicks the ball to the other team to decide where the offense will start with the ball. Kick-offs also occur after scoring. The team that just scored kicks the ball off to the other team. The field goal and field goal block team are also special teams. Same with the punt and punt return team.

So there you have it, American football 101. Come watch this Saturday April 30th as the Bratislava Monarchs take on the visiting Brno Alligators.