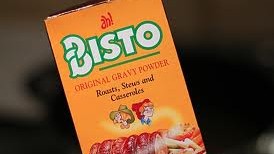 There is nothing to an “Islander” (British or Irish, even the Americans), we simply love gravy. Its good with almost every main meal, roast beef, chicken, lamb or turkey served up with roast or mashed potatoes and juicy veg on the side.

Gravy is also well used in various delicious pies, like steak and kidney, shepherds and cottage pie. Even the Scottish gourmet marvel Gordon Ramsey is a huge advocate of real gravy, as am I.  All top chefs say it’s easy to make, but is it hell! It’s easy to make a total balls of too, but once perfected it’s a doddle. But who has the time.

So people claim to make their own, using meat juices and then thickening them up with reliable Bisto, “Ah Bisto!”, the things one can accomplish with Bisto. It is even claimed to cure the gallops by certain friends of mine who have a tendency to overdue the Guinness, seemingly as it browns, seasons and thickens. Try it on chips, or yer bangers and mash. Maybe McAlpine fed his fusiliers on it or Macadam got his inspiration from it, who knows?

So, any ex-pats who wish to do a nice homely Sunday dinner, visit Tesco in Lamac, where you will find two varieties of Bisto and a special offer on lamb, real Irish Lamb produced by Kepak – this is a genuine Irish brand leader in meats. Kepak was founded by Noel Keating in 1981 and the origins of the company were laid well before this when he established his first butcher shop in the Liberties in Dublin. It’s not just a generic Tesco brand, so it’s the real deal.

If you are thinking of making a stew or a casserole? Bisto is “your only man”! Use it to thicken the sauce or soup, whatever you want to call the tasty liquid that your meat and vegetables’ are suspended in, and even add a little Guinness or ale if you can get it.

Stew is basically goulash; I think the first mention of stew was by the Scythians way back in “some time B.C” and then Irish Stew was mentioned by Byron in 1814. Mostly it is said; lamb or mutton is used, where as in fact given Ireland’s history of rule by the British (English) absentee landlords, any meat what-so-ever would have been used.

This leads me to ponder; maybe that’s why Manx cats, through evolution, have shed their tails. I am sure the Manx folk were as hard hit as the we were were during the potato bight of the mid 1800’s, making the cats harder to catch. Toad in the hole might have been accompanied by Cat in the bag served with Ratatouille. I have seen a thing on a menu called Shepherds bag in Bratislava, but I have never been brave enough to order it. The thought of a big hairy manly shepherd singing soprano chills me to the core.