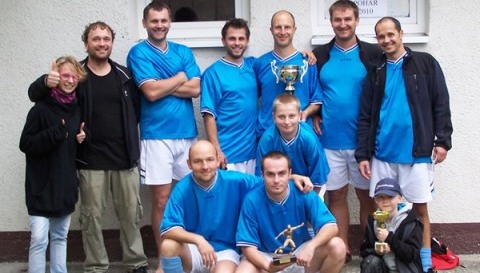 The Pociatek Pohar (2001-2011) indoor football tournament is to be held this Saturday at Sklenarova stredna skola in Bratislava. The event is held every year in memory of football loving Ivan Pociatek who died battling cancer in 2001.

The tournament is organised by Tournament Heaven who also run tournaments in Ireland and Italy. This year EIC of The Daily will lead the Bratislava Academicals into battle as every year. With teams flying into Bratislava solely for the tournament, there is always an international flavour to the event with different nationalities competing and it always proves a great day out for players and fans alike.

Last year’s tournament was filled with an unprecedented level of emotion as the organiser’s own team, TIP (Team Ivan Pociatek), was crowned as champions in 2010. 10 years on since Ivan’s passing, the cup bearing his name, now has his young fledgling team engraved at the bottom.

The matches start at 9am and conclude with the final and 3rd place final at 3.30pm finishing at 4pm. For more information, please see the website: