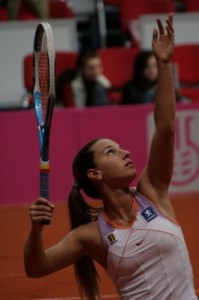 The last remaining Slovak tennis player in the Australian Open singles, Dominika Cibulkova, has made it through to the third round after beating Alberta Brianti of Italy.
Cibulkova stole the first set in style, conceding just one game to win the set 6-1. The second set in the two-hour match was all square at 4-4, but then Brianti beat Cibulkova’s service and went on to win the set 6-4.
Cibulkova came out blasting in the third set, though, gaining a lead of 5-0, leaving Brianti with no chance of getting back into the set, which she eventually lost 6-2.
Now the young Slovak player is up against number one in the ranking, Caroline Wozniacky of Denmark.
Cibulkova’s success in the tournament means she will surely overtake her team mate Daniela Hantuchova, who has been struggling with physical problems, and was knocked out in the first round.
Lorenzo DiCicco – LaVoce.sk