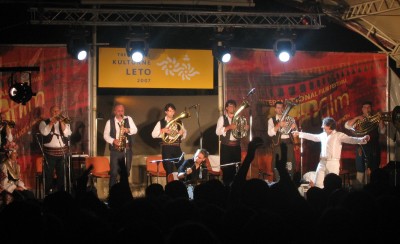 Do you want to see the Balkan live? Do you want to be part of the party? If you think of typical Balkan music, then there is no better choice than to see Goran Bregovic wedding and funeral band this Wednesday at the NTC in Bratislava.

Most of the current concert-going generation is familiar with Underground, the legendary Balkan movie made by Emir Kusturica, that wiped out the festivals back in 1995 and even won the award of Golden Palm in Cannes. The music in the movie pictures perfectly the Balkan character and plays a decisive role in the whole movie with hits like Mesecina and Kalashnikov becoming well known worldwide.

Just think of the lyrics of Mesecina, the Moonlight.

There is no you nor me, nothing is there no more, oh no

And I wonder, my dear, What will become of us?

Isn’t this the darkness of the Balkan war pictured in the movie as a continuation of World War II? The merry soul of Gypsy music, its sorrow and its joy. It’s all there, Goran knows and he shows.

Tickets for the concert this Wednesday can be purchase via Ticketportal or from the concert organisers Ore Pole.