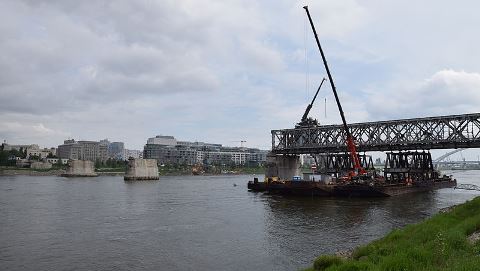 The much-awaited new bridge over the River Danube in Bratislava to replace the previous Stary Most is over ten weeks in delay, meaning the project could lose out on the funding from the European Union.

The project is well behind schedule thanks partly to workers having summer holidays and also up to three weeks off at Christmas, with work halting completely until 5th January. A suspected mine also slowed work a little, as did the discovery of a forgotten water pipeline on Sturova Street, halting work on the preparation of the new tramlines.

If the bridge is not completed by the end of this year, around EUR 70 million in funding from the EU (85% of project costs) could be lost, with the City of Bratislava footing the bill instead.

This state of affairs led freshly elected Mayor of Bratislava, Ivo Nesrovnal, to make a site visit and set out a non-stop plan of work starting in March. A 3-shift work schedule will be put in place and the progress of the project will be monitored more by City Hall. The main contractor is the company Eurovia SK.

The former bridge (photo) was built by the Russian army using German prisoners or war after Bratislava was liberated in 1945. It was only supposed to be a temporary bridge, but stood there until 2010 for traffic and until 2013 for pedestrians, but it became too dangerous due to one of the pillars shifting.