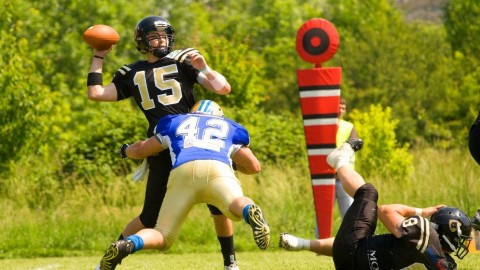 Those with an unbiased view on the Bratislava Monarchs might agree that everything was the way it was supposed to be on Sunday as the Monarchs fell to the reigning champions the Prague Panthers 12-36. After all, the Panthers are not supposed to lose in this league. The Monarchs’ defense had no answer for the Panthers’ running game and the Monarchs’ offense ran flat in a game that quickly spun out of control. The story of the game however belonged to the officiating crew.

In 2006 after the Seattle Seahawks lost to the Steelers in Super Bowl XL, then head coach Mike Holmgren famously quipped “We knew it was going to be tough going against the Pittsburgh Steelers. I didn’t know we were going to have to play the guys in the striped shirts as well.” Every Monarchs player, coach and fan can relate to this thought as the officials made a number of questionable calls. For example, the Monarchs forced the Panthers QB to fumble and recovered the ball only to have the refs call it an incomplete pass. And then, interesting enough, there was a Panthers incomplete pass that was ruled as a fumble and the Panthers recovered it for a 20 yard gain. After 3 ½ quarters of constant penalties and botched calls, the Monarchs fans grew restless and started yelling at the refs. The refs then decided to cancel the rest of the game. The repercussions that this will have on the Monarchs will be decided in the upcoming days by the CAAF.

While the phantom penalties and kicked calls may have not affected the outcome of the game, it would be good to see the CAAF and the refs accept accountability for the poor officiating and take measures to be more consistent in future games and just let the athletes play.

Officiating aside, credit must be given when credit is due and the Prague Panthers showed why they are the team to beat in the league. They scored 3 touchdowns on offense, including one on their first drive, 1 touchdown on special teams with an 81 yard punt return, and 1 touchdown on defense with an interception run back.

The Monarchs were only able to find the end zone twice. After another controversial turnover that awarded the Panthers the ball, justice was quickly served as Monarchs cornerback Peter Rosinsky intercepted a pass and ran the ball back 31 yards for a touchdown. The other touchdown came on a 5 yard run by quarterback Parker Siemens in the second quarter.

The Monarchs are now 3-1 in the Czech League and hope to regroup when they travel to Prague on June 5th to face the Prague Lions. There is still much at stake as the league’s top teams fight for the #1 and 2 seeds in the playoffs to secure home field advantage.