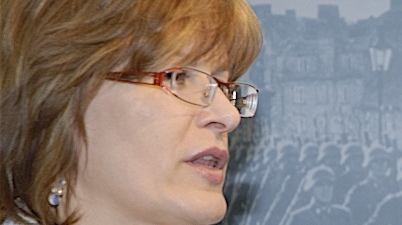 After failing to get the expected support in the SNS party elections, former party vice-chairwoman Anna Belousovova is claiming that the election was manipulated and the whole party congress a farce.

She had to swallow a landslide victory by long-standing party figurehead Jan Slota with 180 votes, as she herself got just 45 votes from a possible 271, while also losing her post as vice-chair. After the party congress, she thanked those 45 who had been “courageous” enough to express their opinion openly.

In the run-up to the party elections, Belousovova had left her attacks on party figurehead Jan Slota until the last moment. She had also called for a blind ballot to take place, but in the end it was a “super-public vote” she said.

Before the congress, Belousovova had been forced to deny that she would set up her own party if her bid as party leader failed. Now she probably wishes she hadn’t openly declared this, as she will have to stay with the party just to save face, at least for a while.

She referred to the level of hypocracy within the party and how it was heading down the same path as the LS-HZDS party, which didn’t make it into parliament this time round. Her only option now is to set up a platform within the party, but many analysts see this as the first step to her eventual departure anyway.

After the congress, political analyst Grigorij Meseznikov told TASR newswire that as Jan Slota had demonstrated once again his control over the party, there was not much perspective there now for Belousovova. Especially because of her attacks on Jan Slota right before the congress, which will rule out co-operation between the two.

Meseznikov believes that Slota will not forgive her this time and that he will not accept any factions within the party. Now that Belousovova is only an ordinary party member, the formation of a faction is highly unlikely, feels the analyst, saying that the establishment of a new party is the most likely scenario.