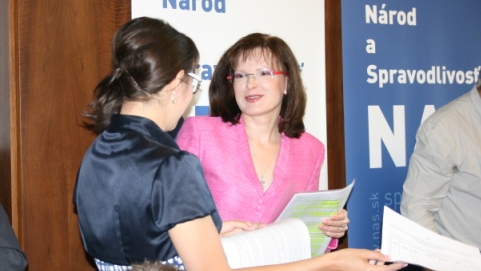 Former vice-chair of the nationalist SNS party, Anna Belousovova, has almost already drummed up the 10,000 signatures needed to register her new party, the NAS (Nation and Justice), but the party’s canvassers will stay on the streets for another month anyway.

After being ousted from her beloved SNS party in February 2011 following a power struggle, in May Belousovova announced her intention to establish the NAS party, which could see the division of nationalist voters once again, just like during her previous divorce with the SNS.

Once the last remaining signatures are collected, the party can then register with the Ministry of Interior and start pressing for voters. Belousovova made it clear at that time that her party will differ from the SNS in the sense that it will not be promoting conflicting and xenophobic patriotism.