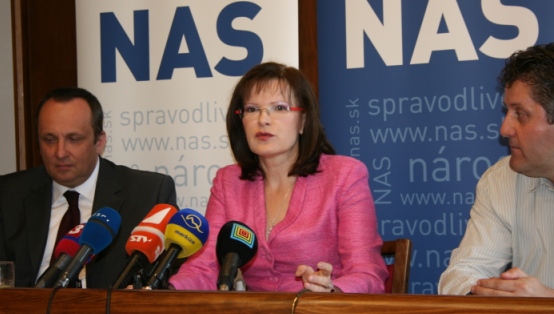 Independent MP and former SNS vice-chair Belousovova held a press conference in parliament today to announce the name and objectives of her new political party, for which she has now officially started collecting the 10,000 signatures required.

The party is called Narod a Spravodlivost (NAS) meaning Nation and Justice and as an acronym it resembles the word ‘ours’. Belousovova laid out the objectives of the party and her feeelings about the Slovak political scene, saying “To date in Slovakia there has been no political power that corresponds to the new political trend and which is capable of dealing with existing challenges. Now there is”!

On the subject of potential partners of the party, Belousovova said it was too soon to say because only those who get into parliament can be coalition partners, so that won’t be known until after the next elections. She said the party had a new approach and its mission was based on “civilised, democratic, non-xenophobic and non-confrontational patriotism”.

Belousovova added that the future party was already receiving various offers of assistance and donations, but that until the party was officially registered they could not be accepted. She underlined that the party would be funded in a transparent way from sponsors, adding that she “had never been in politics for the money. For a 100%, nobody can buy me or this party, it is not some merchandise” she added.

Belousovova, who was kicked out of the SNS party after 20 years in what she referred to as a “cleansing”, made references several times to someone being personally responsible for the situation in Slovakia, because they had made mistakes in the run up to the elections. She was apparently referring to Jan Slota, but without mentioning names, as the SNS had bad results, which in the end meant the current coalition could take power.