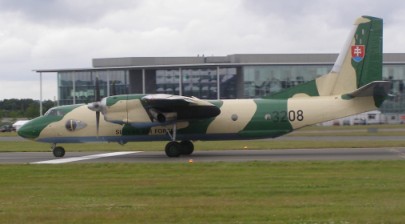 Yesterday Slovak defence minister Lubomir Galko travelled to Bosnia and Herzegovina to meet representatives of the EUFOR mission in Sarejovo, for which Slovakia is now responsible.

Galko’s journey was not without complications, though, as a bird smacked into his AN-26 military aircraft as it came down to land at Sarajevo Airport. The plane was damaged and so another will probably be sent from Slovakia so the defence minister can deal with his agenda and get back.

Slovakia replaced its guard command unit in Sarejovo with professional soldiers earlier this year after it took over the job of co-ordinating the international EUFOR-Althea operation in Bosnia and Herzegovina.

Galko was welcomed to Camp Butmir by a Guard of Honour comprising of all the EUFOR contributing nations. The minister was accompanied during his visit by H.E. Dr. Miroslav Mojžita, Slovakian Ambassador to Bosnia and Herzegovina, and Major General Miroslav Kocian, Chief of Operation Staff.

The Minister of Defence was welcomed to the EUFOR HQ by Major General Bernhard Bair, COM EUFOR. During the subsequent Office Call, COM EUFOR briefed the delegation on current situation in the country and the status of Operation Althea, the name of the EUFOR mission in BiH. They engaged in a wide ranging set of discussions about EUFOR’s role as the military component of the overarching European Security and Defence Policy mission in BIH, EUFOR tasks and capabilities in support of BiH’s efforts to maintain the safe and secure environment. They concluded by discussing the continuing co-operation with the AF BiH in a number of areas such as training.

Mr Galko then visited the Slovakian commanded Liaison and Observation Team (LOT) House in Novo Sarajevo. The LOT House comes under the co-ordination of the Regional Coordination Centre (RCC) South. The minister was briefed on the current LOT activities being undertaken and how the LOT Houses form a vital part of maintaining situational awareness across BiH. They explained how they have developed a relationship with the local community in order to support the maintenance of a safe and secure environment.

Currently, Slovakian personnel command the Regional Coordination Centre (RCC) South which supervises the work of their Liaison and Observation Teams (LOT) based in southern Bosnia and Herzegovina. They are also in charge of the operation of LOT Houses in Višegrad, Novo Sarajevo and Foča.

COM EUFOR praised the high standard of the Slovakian troops serving in EUFOR, highlighting how well those in the LOT houses had developed relations with their neighbours and the local authorities. He went on to thank the Slovak Republic for increasing their contribution of personnel to Operation Althea earlier this year and their continued support.