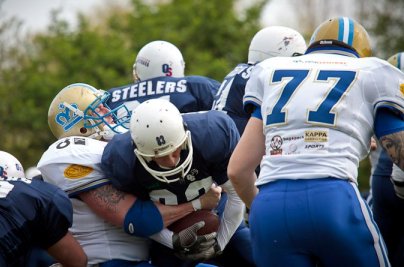 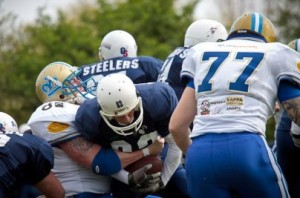 The Bratislava Monarchs past their initial test on Saturday as they defeated the visiting Ostrava Steelers in a decisive manner. The game was close only in the beginning as the Monarchs scored touchdowns on 3 of their first 4 offensive possessions. The game opened with a 13 play, 60 yard drive that was capped by a 1 yard touchdown run by quarterback Marek Galka. Shortly after, on the Steelers’ first offensive possession, linebacker Peter Vavrek caused the Steelers running back to fumble the ball and cornerback Juraj Sanitra recovered the fumble and ran it back 25 yards for a touchdown to make the score 13-0.

Even though a blocked PAT and run-back led to a 13-2 score, the Monarchs remained in control for the rest of the game. The afternoon belonged to running back Rasto Kadlecek as he had a career day carrying the ball 16 times and picking up 126 yards. He ran like his uniform was made out of banana peels as the defense just kept slipping off him. This was complemented by fellow running back Jozef Pito,  who didn’t have a bad day himself, running 11 times for 59 yards. Amazingly, Kadlecek and Pito had no touchdowns between them.

It looked like the Steelers might make things interesting after scoring a touchdown to make the score 13-9 but the Monarchs answered right back and capped off the ensuing drive with a 1 yard touchdown run by running back Stefan Slovak to make the score 19-9 after a failed 2 point conversion. The Steelers never really found answers for the Monarch defense as they punted 3 times in the first half. However, after the Steelers secondary intercepted a pass from Galka it looked like they could bring themselves back into the game, but once again the Monarchs defense allowed nothing and the Steelers never scored again. Galka found wide receiver Marek Belicka in the end zone twice more in the afternoon for touchdown catches of 18 and 11 yards. When the score was 35-9 the Monarchs had two more chances to score but tight end Marek Balog was tackled one yard short of the end zone on 4th down and the game ended on the next drive with the Monarchs on the Steelers’ 4 yard line.

The Monarchs ended the day with 313 total yards, 99 passing and 214 rushing. The next game is April 30th against the Brno Alligators in Bratislava.

If you come to the game and drink beer, eat Ciganskas, smoke cigarettes, etc… please throw the trash away as we (the Monarchs) will have to clean it at the next practice. Even though we don’t like running and doing push-ups, we don’t like picking up trash either. Don’t be an asshole.

The Monarchs are still looking for coaching assistants, consultants, people to help out at the games (selling tickets, recording stats, etc)  and of course athletes