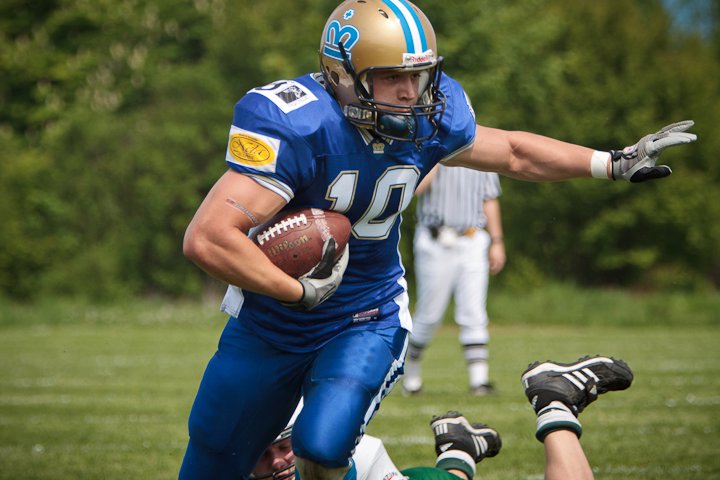 When life gives you lemons, make lemonade. When life gives you Alligators, make Gatorade. I’m funnier in real life… honest. The Bratislava Monarchs blew out their rivals the Brno Alligators on Saturday with a 50-3 victory at Monarchs field. The Alligators’ offense never got anything going against the stingy Monarchs defense and quarterback Marek Galka had a great touch all day as the Monarchs improved to 2-0 in the Czech league. Canadian defenders Ben Rush (DE) and Matt Walker (S) made the most of their Monarchs debut by combining for 7 tackles and a take away each (in the first half): a fumble recovery by Rush and an interception by Walker.

The second half saw a more conservative play by the Monarchs as running up the score is not proper football etiquette. However, tight end Marek Balog had an impressive catch in tight coverage in the end zone and running back Jozef Pito punched the ball in from 1 yard out for the second touchdown of the second half and final score of the game. It was all Monarchs on this day as the game was never really close. The Monarchs hope to continue their winning ways as they take their show on the road starting next weekend.

Next Game: Saturday May 7th vs. the Ostrava Steelers in Ostrava, CZ. Kick-off at 3pm. In the season opener on April 16th, the Monarchs beat the Steelers 35-9.

In the inaugural game of the first season of the Slovak league on Friday April 22nd the Monarchs beat the Nitra Knights 21-7 and beat the Zilina Warriors 31-6. The Slovak league games are played on a shorter field with only 7 players per side.

This was most likely Marek Galka’s last game as quarterback in the Czech league. The Monarchs are welcoming Parker Siemens from the University of Saskatchewan Huskies this week. Siemens will play quarterback and Canadian teammates Ben Rush and Matt Walker will play defensive end and wide receiver, respectively. Galka will go back to his original free safety position on defense.