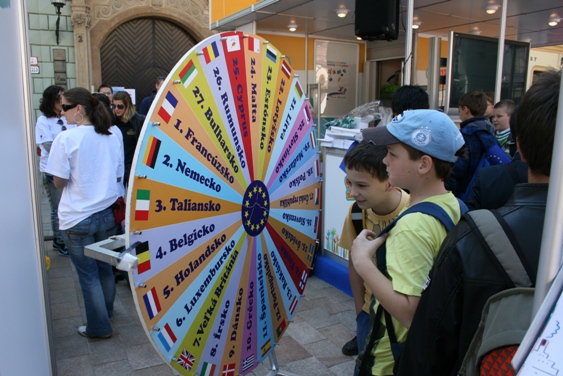 Yesterday, the Main Square in Bratislava was the venue for the Europe Day celebrations in commemoration of the 61st anniversary of the Robert Schuman Declaration from 9 May

1950, a kind of forerunner to the European Union treaty.

The event was mostly directed at children, with quizzes, balloons, a big jigsaw puzzle of Europe, a lucky wheel and live music from a local band.

An information stall had lots of information leaflets and booklets about the various EU programmes and possibilities of funding, with friendly staff to help out.

At the event, head of the European Commission Representation in Slovakia, Andrea Elschekova-Matisova, pointed out how Slovakia was benefiting from its EU membership and how no wars had been waged in Europe since Schuman’s Declaration, with competitiveness now played out in sports instead.