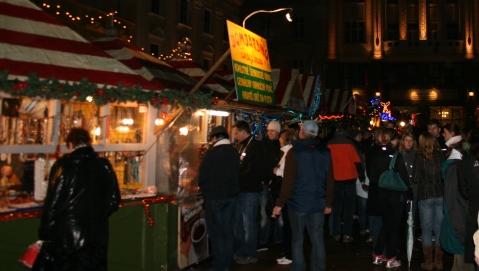 The Christmas Market in Bratislava is a special attraction that gives residents and visitors alike the chance to enjoy some time together in the run up to Christmas right in the historical heart of the city. The market is well-recognised as being of the most popular social events in the Slovak capital during Advent.

The intimate “town” market atmosphere has been preserved, despite its commercial side. As every year, the Christmas Market will be officially opened at 4pm with the ceremonial switching on of the Christmas tree lights, which mayor Milan Ftáčnik will do at around 4.30pm today.

The stalls will then be open for business every day from 10 am to 10 pm until 23 December. There are Christmas markets also set up at three other squares: Franciscan Square, Hviezdoslav Square and the square at the Eurovea complex along the River Danube.

The Bratislava Christmas Market can be characterised by the special selection of Christmas fare on offer, which reflects traditional national cuisine. For example, you can try a ‘Gypsy liver’ burger (Cigánska pečienka), roast sausage, lardy bread with onion, ‘pagáč’ savoury pastries, goose and steamed cabbage filled ‘lokše’ (potato crepe), sauerkraut soup, hot punch, mulled wine, grog etc. Traditional meat and fish dishes are prepared on the grill before the eyes of visitors, and for dessert why not try some sweet pastries, filled wafers, honey biscuits, honey or Christmas mead. The sale of hard alcohol and beer is not allowed. This year you can choose from a total of 26 food stalls on the Main Square and on Franciscan Square.

This stalls at the market are full of special items that complement the atmosphere of the approaching festivities and that emphasise their Old World character. Wood, glass, leather, wicker, dried corn husks, or beeswax; these are just some of the traditional materials used to make the practical and decorative goods. In its effort to promote traditional arts and crafts, the city designated also 18 stalls for sellers of traditional artistic items. You can find a full list of stalls at this year’s Christmas Market on the city’s official website at www.bratislava.sk, under Christmas Market 2011.

The pre-Christmas atmosphere in Bratislava would not be complete without a rich cultural programme, which visitors can enjoy every year at stages set up on the Main Square and Hviezdoslav Square. You can check out the full programme on the special Christmas Market website at www.vianocnetrhy.sk. The “Christmas in Bratislava” programme in December includes the likes of free ice-skating for the public on Hviezdoslav Square, the St. Katherine wine-tasting in Primate’s Palace, a concert to commemorate the 40th anniversary of the Bratislava City Choir, a Santa Clause programme for the kids, children’s Christmas workshops, an Advent concert in St. Martin’s Cathedral or the exhibition “Life for hockey” in the recently renovated Old Town Hall, which looks at the history of ice hockey in Slovakia.