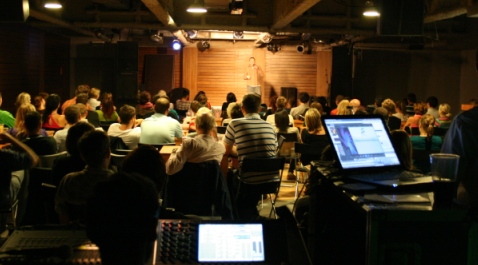 Wednesday night’s English stand-up comedy night was yet another great success.  This month’s event moved to a brand new venue in Bratislava, the Dunaj (Danube) Club, with stunning views of the sunset over the castle and the city.  The event is run monthly by ‘Baby Blue Banana’ in various European cities and each month they bring top comedians from the UK and Ireland, performing alongside local talent.  Aimed mainly at the local expat crowd and Slovaks wanting to show off their English, it’s also a unique chance to meet new people from all over the world.

The adverts promised us 5 comedians, although there were arguably only two of any note…  First on stage was the local MC, Milan Sedliak, who is cute in a balding Mr Bean kind of way.  Although his poor English grammar frequently grates, I must admit he is intelligent and sharp and has built up a good relationship with the regulars.  Then we heard an up-and-coming but somewhat amateur American who overdid the masturbation jokes and a Slovak who was unprepared, managed to offend virtually all nationalities, made a ‘joke’ about Roma children and was all but booed off stage.  However, I have to admire anyone with the confidence to get up there and give it a go…

The two main acts more than made up for the weaker opening.  First we were entertained by John Robertson, an instantly likeable Australian comedian, full of energy and smiles.  He immediately got the crowd on side with an inspired number comparing people born in the 50s, 60s, 70s and 80s.  He played the ukulele, got everyone singing, and even managed to make a joke about Slovakia and ‘Hungaria’ without being offensive.  He succeeded in what I feel is one of the most important things for comedians performing abroad, and that is to have an appreciation of the local culture and to include this in their act.

The headliner from the UK, Craig Murray, was in my opinion a bit full of himself but clearly an experienced and professional comedian who responded quickly and wittily to the audience’s reactions.   He overdid it a little with a poor Romanian guy who found himself at the butt end of his jokes, but overall was a big success.  Craig is a perceptive observer of human nature and he had the charisma to communicate with (and insult without injury) any audience.  As a teacher, I appreciated his jokes about school students and I loved the business card that he had picked up in London for ‘Wan Cars’ (say it out loud).

As I was leaving, I overheard a few comments that the favourite was ‘the Australian’, possibly because of his charming and cheeky smile, but overwhelmingly positive feedback that the night had been enjoyed all round.

I have lived here in Bratislava for 8 years and, although I’m now fluent in Slovak, the subtleties and in-jokes of humour in my own language is one of the things I miss the most from home.  It’s great to have an occasion to laugh out loud, meet friendly people and share a common interest in comedy.  It was also interesting to hear so many international groups of friends conversing in English and, refreshingly, Slovak.

Look out for the next comedy night on 24th August!