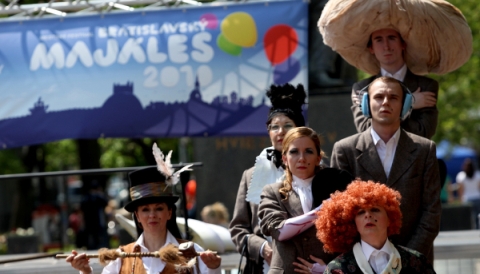 ‘Majáles’, the first big open-air festival of the year, takes place in Bratislava on May Day weekend. This year it will coincide with the Ice Hockey World Championship, which is being co-hosted by the city from 29 April. Live music, fireworks and events for children – not to mention thousands of extra foreign visitors – will make for a big start to summer in Bratislava.

In many countries, May Day is associated with workers or labour – indeed, this was overwhelmingly the case in Slovakia before 1989. But the annual celebration has a much longer heritage, dating back as far as the pre-Christian era. The end of winter and the start of the farming season are traditionally marked by maypoles in northern Europe, morris dancing in England, and festivities everywhere. In Bratislava, the emphasis is now very much on celebrating what has been nicknamed “the Spring New Year”. 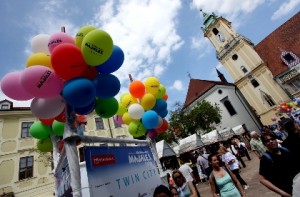 The Bratislavský Majáles – or Bratislava May Day Festival – was revived in 2008, and is now in its fourth year. It has become established as one of the city’s main public festivals, with top Slovak music acts playing live on stages in the old town and on Tyršovo Embankment, on the opposite side of the Danube.

The 2011 festival kicks off on Friday, 29 April, with a 6pm concert in the old town’s Main Square by the Bratislava Hot Serenaders, a jazz orchestra specialising in the music of the 1920s, 30s and 40s. On the south bank a parallel pop concert will take place on the ‘Warm-up Stage’, next to which there will be a food and drink zone. 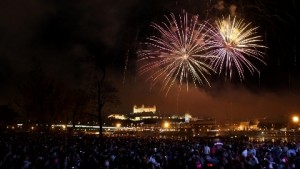 It’s not all music: on Saturday, April 30, children’s entertainers will occupy Main Square; Hviezdoslavovo Square will be the venue for street theatre, as well as live music ranging from rock’n’roll to klezmer; while the Extreme Gang will perform bike stunts and break-dancing in the adjacent Rybné Square. And for those wanting to take to the water, a festival boat will offer free rides across the Danube every 30 minutes. 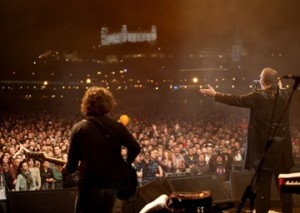 The highlight of the weekend events is a live rock concert starting at 6pm on Saturday night, on Tyršovo Embankment. Acts include punk-rockers Slobodná Európa, Bratislava favourites Hex, and Slovak singing legend Richard Müller. The concert climaxes with a display of fireworks, launched from the river to the strains of Strauss’s ‘Blue Danube’ waltz.

On Sunday, May 1, the festival continues with the Tatra Rallye, a gathering of historic cars in Hviezdoslavovo Square, and a public bicycle ride starting and finishing on the south bank.

All the attractions are free – and with so many ice hockey fans in the city for the IIHF World Championship, this year’s festival promises a cosmopolitan start to summer in the capital.