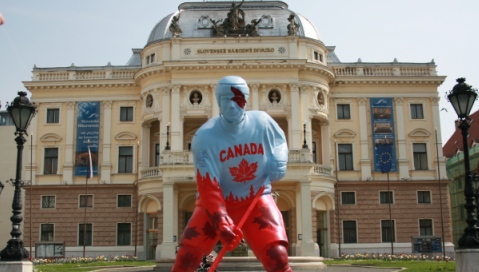 Bratislava mayor Milan Ftacnik announced last week that the city was now ready for the onslaught of hockey fans for the Ice Hockey World Championships, but even so, the city continues until the last minute making cosmetic adjustments to the city’s image.

The city adopted a clever strategy on how to deal with all the graffiti-ridden underpasses, as it agreed with amateur sprayers from around Slovakia to give the underpasses and other areas a facelift, creating paintings on the theme of the hockey championships.

The results are impressive, especially in the underpasses at Trnavske Myto junction, which were targeted at the weekend. The graffiti artists did the work for free, while Bratislava City Hall paid for the actual sprays with sponsorship from mobile operator Orange.

The city has also been brightening up various squares and hot spots like the bus and train stations by planting over 700 flowers and plants in various places in co-operation with the organisation Pressburg Gardening.

Now ice hockey players can be seen in the streets of Bratislava. Well, statues of hockey players with one statue for each participating country being dispersed around Bratislava. The figures are bigger than life-size and are already attracting a lot of attention from tourists.

Restaurants are also shaping up for the start of the championships this Friday, putting the last finishing touches to outdoor seating and TV screens in the Old Town centre. Because of a local bylaw, though, they are only allowed to have the sound on until 10 pm. This is before the evening matches end and so fans will have to accept a dampened atmosphere as matches reach their conclusion.

All in all, the city is as ready as it could be, and the fans and tourists are bound to enjoy the electrifying atmosphere that accompanies such a major sporting event as the Ice Hockey World Championships. All that is left now is for the Slovak ice hockey team to go for gold!