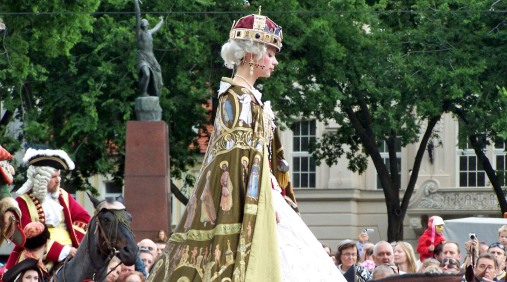 On the 24th of June 2012, Bratislava celebrates the 10th anniversary of the most famous historical-cultural event in Slovakia, the Coronation Festivities. This year’s festivity will commemorate the coronation of the Princess of Mantua, Eleonora Gonzaga, wife of Ferdinand III, which took place on the 6th of June 1655.

The ceremonial of the coronation will start at 3pm on the Main Square, as usual. Next, the Knights of the Golden Spur will be ordered, also on the Main Square. As part of the Festivities, there will be a traditional crafts market on the Hviezdoslav Square. This year’s novelty will be the Festival of the Blaufränkisch species of wine, the favourite drink of Maria Theresa. It will be organised on the Primacial Square. Both events will take place from the 22nd to the 24th June.

The role of Queen Eleonora will be played by conservatory student, Lucia Komorovská. Filip Tuma, playing for the third time a royalty at a coronation festivity will be Ferdinand III. The royal couple will be accompanied by their four children.

Eleonora Gonzaga was the third wife of Ferdinand III, both of his wives had died before. She was 22 years younger than his husband, and was 24 to receive the crown. She was a very cultivated woman, especially interested in music and literature. Being also deeply religious, she founded some orders. She overlived his husband by almost 30 years, and was an important personality also during the reign of his stepson, Leopold I. She died at the age of 56 and was buried in the family crypt of the Habsburgs in Vienna.

The coronation will be more authentic this year. The organizers want to bring closer to present day people the symbolism and acts which took place during coronation ceremonies as well as the roles of those who had participated in the respective events. The ceremony will be enacted also in Latin, as in the past, moreover the actors will be look-alikes of persons in the real procession, too.

Bratislava became the coronation town of Hungarian kings when Székesfehérvár fell into the hands of the Turks, and thus, Hungary lost its coronation town. Hence, the ancient town of Pressburg (Bratislava) became the seat of the assembly of the kingdom, the residence of the king and the archbishop. In St. Martin’s Cathedral, between 1563 and 1830, ten kings, a reigning queen (Maria Theresa of the Habsburg Dinasty) and eight consorts were crowned. The first person to accept the title and the crown of St. Stephen was King Maximilian on 8th of September 1563, and the last Ferdinand V on the 28th September 1830.

This tradition of the coronation is brought back to life every year to commemorate the famous past of the city. Each year another king or queen is crowned, as they followed each other in history. The whole ceremony is re-enacted with some changes, e. g. the coronation ceremony now takes place on the Main Square, so more people can see it than in the cathedral. It is always accompanied by costume parades of nobles and musicians, a knight’s tournament and demonstrations of contemporary martial arts as well as performances of jugglers, belly dancers, fire eaters and enormous puppets. This attracts more and more people every year.