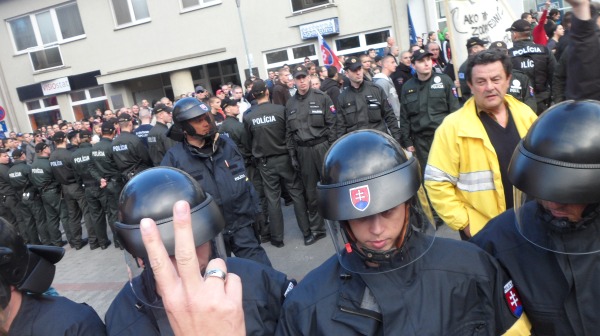 On Saturday, hundreds of protesters took to the streets of Bratislava to express their anger. Most of them were peaceful but there was also a presence from violent right-wing skinheads. Police cars were vandalized. People held banners that read “Slovakia is not Africa” and one Arabic family, including a mother and baby in a pushchair, was pelted with stones. The International City Downhill bike was brought to an abrupt and shameful end as the protesters swarmed the end of the course.

These protests come as the discussion on the influx of immigrants to Europe from mainly war or poverty inflicted parts of North Africa is coming to a head. The European Commission proposed a solution which would see at least 40,000 immigrants resettled throughout the EU with certain quotas for each Member State based upon current population (40%), economic growth (40%), unemployment (10%) and current engagements with asylum seekers (10%).  For example, Slovakia would receive a quota of around 700 immigrants to resettle as it is a reasonably small Member State without major economic growth.

We can see tension and disunity in the different attitudes of the Member States on this issue. Many countries in the West such as Germany, France and the UK are feeling the impact of immigration. Just 5 EU countries attract 70% of immigrants. The EU has proposed that all the Member States come together to solve this problem and take the weight off the most effected countries, but attitudes are much more defensive among the newer states.

The Czech Republic and Slovakia are strongly against the quotas. Hungary is also strongly against immigration and has announced plans to build a 4 metre high wall along its 177km Serbian border, this comes at the same time that the country has openly discussed the possibility of internment camps for immigrants. Poland has announced they only want to accept Christians. This comes after many citizens of these countries flooded to the Western States to find higher paid jobs or better opportunities.

The immigration discussion within the EU is currently up in the air with no real solution in sight. With mounting pressure from all sides, a conclusion will have to be reached pretty quickly.