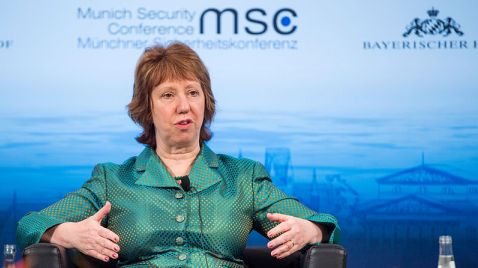 Catherine Ashton, the High Representative of the Union for Foreign Affairs and Security Policy for the European Union, was awarded with the Order of the White Double Barred Cross Second Class in Slovakia by freshly inaugurated President Andrej Kiska, who presented his first state award on July 1, 2014.

According to the President’s Office, the Vice-President of the European Commission Ashton was awarded with the Order for extraordinary contribution to strengthening and supporting common foreign and security policy of the European Union together with extraordinary merit for encouraging the position of Slovakia in international relations.

Miroslav Lajčák, the Minister of Foreign Affairs of Slovakia, invited Catherine Ashton to visit Slovakia and besides meeting with the president, she attended a meeting of Slovak ambassadors serving abroad and she also met Pavol Paška, the Speaker of the National Council of the Slovak Republic.

According to SITA newswire, she discussed the situation in Ukraine, western Balkans, the role and postion of EU’s foreign policy with Foreign Minister Miroslav Lajčák.