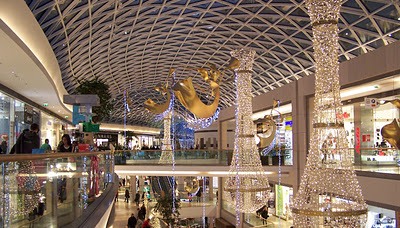 In Slovakia, the period of Christmas starts after All Saint´s Day. This is the time when cities, villages and shops are decorated. The most common decorations are the Christmas trees which must be present everywhere, just like the illuminations.

Nativity scenes are also parts of the decoration, especially on the squares of the cities, but they always go together with the tree. In Slovakia, the Nativity scene represents only the scene of Jesus’ birth, with the Holy Family, the shepherds, the animals and the three kings around the newborn child. Usually it is one piece made of wood and without colours. Some people put Nativity scenes also in their homes, but these go under the tree or into the window, and are also made of a single piece.

Houses are being decorated in the beginning of December, or around the day of Santa Claus or St. Nicholas (the 6th of December). Decorations are put into the windows and on the gates – they are always wreaths or other decorations with branches of pines, ribbons and other symbols of Christmas (candles, bells, fruits – the two most common symbols of Christmas are the mistletoe and the holly). Another symbol is the Poinsettia. Lights are put as well in the windows and outside in the gardens, everything what surrounds us can be decorated. From December we can hear the Christmas songs in public places and in the bigger towns Christmas markets can be seen in the main squares. In Bratislava, they start already in November, but in the majority of cities only some weeks before Christmas.

Four weeks before Christmas, starts the Advent time, during which a wreath with 4 candles is made, and every Sunday one of these is lit. The last one is lit on Christmas Eve. An Advent Calendar containing 24 windows can also be made, especially for children, usually from paper. The children have to open one window every day to find in there a surprise, above all, chocolate.

The first important day of the Christmas period is the day of Santa Claus or St. Nicholas – the 6th of December, and its Eve. On the night of the 5th of December, children clean their shoes and put them into the windows, for Santa Claus to bring them gifts. Usually, little things are given, the custom was always: chocolate, candy, fruits, and to the bad children carbon, onion or a wooden spoon. Today, other things are also given, like little toys, but the idea is to give eatable things. On the day of the 6th of December we can see ‘Santa Clauses’ everywhere, usually accompanied by two other beings – an angel and a devil. It’s common also to see these figures in horse-driven carriages.

Before the 24th of December, people are preparing for Christmas Eve. They buy the gifts much before, and they are enjoying the Christmas atmosphere wondering on the streets and in the shops. The Christmas tree can be every year natural or artificial. It used to be decorated in the evening of the 23rd or in the morning of 24th, when the typical dishes are also being prepared.

The typical drinks for this season are the mulled wine, the punch and the honey wine (a typical Slovak drink), which can be bought everywhere. Another typical Christmas product are the wafers. Slovaks eat it with garlic and honey. The typical dish for Christmas Eve is fried carp with potato salad with mayonnaise, and the fish soup. The carp is bought live, being sold in every place. For the Slovaks more typical is the cabbage or lentil soup (to eat a fish soup is a Hungarian tradition). It’s the day of Lent, when fish is eaten, and no meat. The typical desserts are the cakes filled with walnut, poppy, apple or cocoa.

On Christmas Eve, the families come together to have dinner, and after dinner they look at the presents they had placed wrapped under the Christmas tree. In Slovakia, children think that the Baby Jesus, to whom they write letters with their wishes, brings them the gifts.
There was a custom in the past that children sang Christmas songs and went to the houses of relatives and neighbours, who gave them money and cakes. To play live Nativity scenes was also a tradition during the whole Christmas period, especially in the past, but we can see them even today.
At midnight, some people go to the midnight mass, or they go to a mass in the morning of the 25th or 26th. In Slovakia, the most important holiday is Christmas Eve, the 25th is the first Christmas day, and the 26th is the second Christmas day. On the 25th people have to be at home, and the 26th, Saint Stephen’s day, is the day for visits.
The typical dish for New Year’s Eve is smoked meet or ham in slices, with grated cheese, eggs, vegetables and horseradish that is eaten with bread. New Year’s Eve is the day of jokes, comedies and parodies. All the programs on the TV and radio are about that. In the evening, people go to dance, to discos or they celebrate with friends or family in bars or other places. At mindnight, they clink glasses of champagne, and there are fireworks everywhere, everybody uses petards and firecrackers.
The symbols of the new year are everything what brings luck – the pig, the four-leaves clover, the horseshoe and the chimney sweeper. On this day, it is not allowed to eat poultry because the luck would fly away.
The last day of the holidays is the Day of the Three Kings, and although it’s not so important, it’s a holiday and there were different traditions connected to this day. The most typical was that young boys dressed up as the Three Kings and visited the houses singing, reciting poems and wishing all the best for the new year.
For more pictures, click here.
By Bibiana Papp, Tour Guide