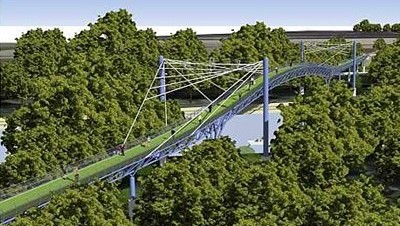 The new cycling and pedestrian bridge spanning the River Morava between Slovakia and Austria, which caught international attention after an online public vote on the bridge name came up with the Chuck Norris Bridge, will not be named after the Hollywood actor in the end.

City Hall thought it a good idea to ask the public to vote on the name, but when someone nominated the bridge to be named after Chuck Norris, the proposal got the full support of Slovaks, who have hoisted the actor to a kind of cult status on social networks as being invincible.

Initially, three names were proposed: Maria Theresa Bridge (after the former Hungarian empress), Freedom Bridge or Iron Curtain Bridge, but residents were also invited to propose other names. After Chuck Norris appeared in the running, thousands of people started voting for his name to adorn the new bridge, smashing any competition.

Instead, the bridge will be called the Freedom Bridge, in memory of all those who were shot or caught and punished while trying to flee to Austria during communism. The bridge was officially opened to the public on Saturday 22 September by Bratislava mayor Milan Ftacnik, Bratislava regional governor Pavol Freso and foreign affairs minister Miroslav Lajcak.

The Freedom Bridge links the Devinska Nova Ves borough to the very popular Schloss Hof estate in Austria, but there is concern on the Slovak side about the dangers facing cyclists trying to get to the bridge. Governor Freso noted earlier how about 5km on the route leading along Devinska road to the bridge is dangerous for cyclists, and so something would have to be done about it, or the whole project would be pointless.

It might officially be the Freedom Bridge, but thanks to the whole hype surrounding the name, many locals look like they will keep referring to it as the Chuck Norris Bridge.  Even Google Maps got ahead of itself in its last satellite image, using the Chuck Norris Bridge name. Seems he might be invincible after all.