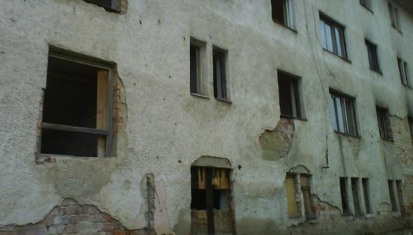 Another case of local authorities taking a firm hand to families that don’t pay rent and allegedly incite trouble saw the eviction of five Roma families yesterday in the town of Cierna nad Tisou.

They reportedly reached an agreement with the local authorities, but the evictions came just two days after some of those being evicted were involved in a violent attack on a local youth football team and their coach. A group of 30-40 Roma youth armed with sticks assaulted the coach, who together with one of the young players (16) had to be taken to hospital in the end.

Many of those being evicted say it is because of this incident, but the local town hall refuted this claim saying a decision had been taken long ago on grounds of not paying rent and devastation of the flats, which the town hall now feels are hazardous to residents.

Backed up by local and state police, a town hall representative went ahead with the eviction of some 50 people from their homes, with the local authority offering only free transportation of their belongings.

Local councillor Miroslav Lorincz informed TASR newswire that two of the families were in rent arrears, while the other three families were there even without rental contracts. Overall, Lorincz said the condition of the flats was dangerous. The flats are all but destroyed.

Mayor Marta Vozarikova said the families were always causing trouble with their neighbours and that the council will be pressing charges against the Roma families for damaging municipal property. Most of those evicted went to stay with nearby relatives or friends, but not all. One young man who has nowhere to go with his wife and child said the Mayor was not a person and that in other towns they give a helping hand, but that here they had given nothing.