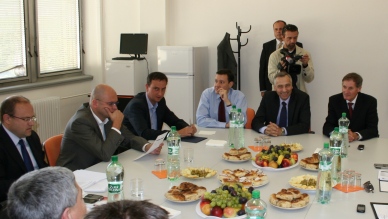 The atmosphere in the fragile ‘lego’ coalition is heated once again after 7 MPs from the liberal SaS party did not vote in favour of a KDH proposal in parliament as agreed.

Thanks to the seven rebels, the proposed KDH revision, which imposes heavy fines for illegal constructions and can order their demolition, did not make it through parliament, and so has infuriated the KDH party members. The KDH leaders gave a press briefing right after the session, at which they called the move a “flagrant violation of the coalition agreement” and questioned whether the SaS was serious about remaining in the government coalition.

Head of the KDH parliamentary caucus, Pavol Hrusovsky, said that the SaS party is mistaken to think it can provoke the coalition in this way. Hrusovsky also informed the media that the party was now contemplating its next steps, while calling for an immediate Coalition Board meeting. This was not possible due to the absence of SaS chairman Richard Sulik, and so they will meet the coalition will congregate this evening instead.

The KDH party feels that the SaS MPs went against their motion because they are acting in the interests of certain developers, with party chairman Jan Figel saying the law at present is suited the ignorant who abused the system. He then demanded that the SaS MPs in question disclose who it is that they represent.

SaS party caucus chairman, Jozef Kollar, said he was sorry about the situation, but one of the rebel MPs, Juraj Droba, pointed out that they also had a limit to their patience. Droba basically confirmed talk about the latest episode being retaliation for KDH’s refusal to support SaS initiatives. When queried by reporters if the vote was a kind of “revenge” or “payback”, Droba said that such words were not appropriate in a coalition, but he eventually agreed that it was ” a signal” to the KDH party.

The disputes within the coalition look set to continue, while in the meantime large construction companies that go ahead with projects without the necessary permits will probably enjoy the current soft conditions for another six months at least, which is when the legislative revision can officially be resubmitted.