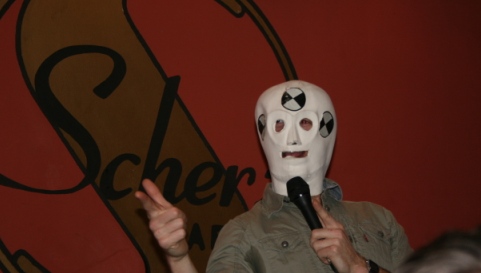 We were in for a good evening of entertainment, as I am sure everyone at the sold out venue of Kafe Scherz would agree.

The MC for the night was Slovak entertainer Palo Janik, who did his best to make his humour work in English, but his delivery was maybe lacking a bit on timing. I hear he is quite funny in his native Slovak, though.

The supporting act was David Young, a part-time humorist who is stationed with the US forces just outside Gyor, Hungary. His humour was appreciated by most of the crowd, although some found it just a little crude for their taste (guy humour).

The main act of the evening, Damian Clark, has an established track record as a comedian and his sharp responses and natural rapport with the audience proved why.

Clark’s humour focuses on topical things that everyone can relate to in one way or another, so he had the crowd on his side from the moment he took the stage. He showed his sharpness of wit as he intermittently picked (on) people from the audience, responding cynically to where they were from, their jobs, or anything else. Some tried to retaliate, but were soon silenced by bursts of laughter from the crowd as Clark hit back with an ad-lib.

A good night was had by all, and with an entrance fee of just EUR 10 everyone got their money’s worth.

Founder of the Baby Blue Banana, Howard Cohen from the UK, spoke to The Daily about the concept and history of bringing English-speaking artists to the ex-pat community in Central Europe.

He started organising English entertainment nights back in 2009 in his adopted home of Budapest. It wasn’t long before he included Prague and Bratislava in the string of venues. It is now a full-time occupation for Howard, and one that he clearly enjoys and believes in.

Howard explained that there would be at least one event a month in Bratislava just now, with possibly more frequent events and larger venues on the horizon, maybe even in other towns and cities in Slovakia.

With agents in the UK, Howard has no shortage of artists at his disposal, and so he is planning to include also English language theatre productions in the Baby Blue Banana calendar.

An initiative like the Baby Blue Banana has been lacking for ex-pats in places like Bratislava and so it should be given all the support it deserves. The Daily will keep you posted about future events, so watch our Culture section for updates.