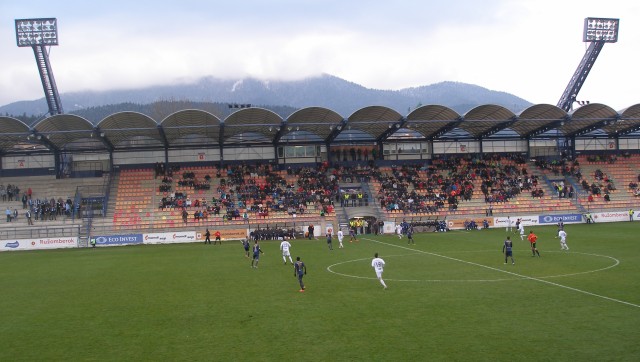 For all that it was played in bitterly cold conditions, Saturday’s Ružomberok v Slovan Bratislava game could only make you regret that the Corgoň Liga is now entering its long winter hibernation. Ruža’s high-spirited ultras group provided a fine atmosphere and the teams produced a skillful, wholehearted contest which ended in a rightful share of the spoils.

Ruža have exceeded expectations this autumn, especially when we consider the ‘restructuring’, necessitated by funding cuts, that took place at the club in pre-season. Coach Ladislav Šimčo has ensured that his threadbare squad has always been organised and resilient,  resulting in a record of 7 wins and 7 draws from 19 fixtures – good enough to leave them just two points adrift of second place. Even during a seven-game winless streak in August and September, Ruža were tough to break down on their travels, as proved by 0-0 draws away to Žilina, Trenčín and Zlaté Moravce.

Last week’s first away success, 1-0 at Trnava, was not well-received by the home side’s new coach Peter Zelenský, who accused his opponents of playing ‘anti-football’. That was undoubtedly a graceless slur on Zelenský’s part, but Ruža will not worry over-much about it. In fact, other teams could learn from the way they defend as a unit, or from how they utilise the power and aggression of Congolese striker Mulumbu Mukendi. And they are not without creative players anyway ; captain Tomáš Ďubek, for example, is one of the league’s most skillful central midfielders.

For their part, Slovan did go into the season with top-of-the-table aspirations. Yet, considering that the campaign started badly enough for Vladimír Weiss to tender his resignation as coach just three games in, they will still be delighted to be 6 points clear by this stage. Samuel Slovák, Weiss’s successor, seems to have found the right way to blend the talents at his disposal, to the extent that the likes of Erik Grendel and Marko Milinković are beginning to look far too good for Slovak football. And, unlike every other side in the league, Slovan have never got stuck in a winless rut. No doubt it’s helped that, when they have lost, Slovák has accepted the fact without looking for excuses. A lesson there for the likes of Zelenský perhaps.

One key aspect of Saturday’s game was the battle between Mukendi and Slovan’s young centre-backs, Dávid Hudák and Kristian Kolčák. Early on, it looked like a battle Mukendi would win comfortably. He put his team ahead in the 5th minute, running onto Štefan Pekár’s through ball before finishing well, and looked stronger in the physical challenges. With Ďubek seeing plenty of the ball as well, it was a difficult opening for Slovan. But they gradually came into the game, equalising on the half-hour. This too was a fine finish ; Lester Peltier picked up the ball on the left, drifted diagonally across the pitch accompanied by a couple of defenders, then hit a low, curling shot which appeared to surprise ‘keeper Lukáš Zich. 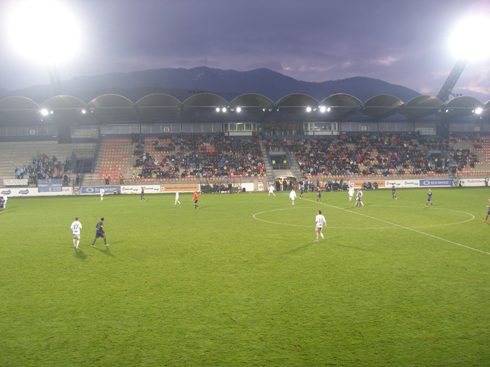 The second-half saw Slovan mostly in the ascendancy. Hudák and Kolčák seemed to be coping better with Mukendi and the midfield began to move the ball around with ominous ease. With 70 minutes gone, they confirmed this superiority with a goal of real beauty. Milinković glided past Lukáš Greššák down the right, looked up and crossed to the near-post, from where Filip Hlohovský directed the ball past Zich with a flick of his heel. The small band of visiting fans weren’t celebrating for long, though. Within five minutes, Mukendi was  tripped on the edge of the Slovan box, and Lukáš Bielák smashed the resulting free-kick through the defensive wall and out of reach of Matúš Putnocký’s dive.

Mukendi and Milinković went close as both sides pushed for a winner, but this was the most honourable of draws. There was nothing in it to suggest that Slovan will not maintain their lead at the top of the league when spring comes around, though the question of whether they can hold onto their best players is a pertinent one. Ruža, meanwhile, showed all the qualities which have enabled them to have such a good autumn. After the final whistle, the home ultras’ chants of ‘ďakujeme’ were proof of their satisfaction, while the Slovan players shared some moments of mutual appreciation with their own followers.

Slovák was typically fair-minded in his after-match press-conference. ‘We came here to win,’ he said, ‘but it’s a difficult place to visit. The home fans created a great atmosphere which encouraged their team forward. (Ruža) were better in the first-half, we were better in the second. A draw is fair.’ It was left to Milinković to suggest that Slovan were worth all three points. ‘We had more of the game overall,’ said the Serb, ‘and we went 2-1 up with 20 minutes left, so we should have won.’ Šimčo agreed with Slovák that the draw was fair, but expressed the view that Peltier’s goal was the turning point. ‘Our defenders should have put him under more pressure, but his finish was fantastic. We were on top until then, but Slovan were better in the second-half.’

As for the other games, Zlaté Moravce remain in second place, but a 1-1 home draw with bottom side Trnava takes them no closer to Slovan. Senica are now third, following Rolando Blackburn’s last minute equaliser away to Trenčín in the Sunday fixture. Košice finally won an away game, 2-1 away to Banská Bystrica on Saturday. The three points take them into fourth, above Žilina (who lost 2-0 away to strugglingNitraon Friday night) and Trenčín. In lower mid-table, Prešov won their second successive home game, 2-1 against Myjava. The visitors are one side who will probably be glad of the winter break, given that they now have just one point from four outings.