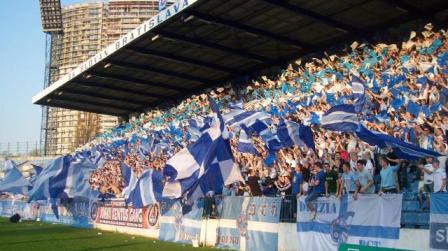 Another narrow win, another increase in Slovan Bratislava’s lead at the top of the Corgoň Liga.On Saturday, Ružomberok were the unfortunate visitors to Pasienky. ‘Unfortunate’ is the key word here because Ruža created, and missed, a succession of fine chances. Slovan took an early lead when Filip Šebo, who these days seems to set up as many goals as he scores, escaped down the right and crossed for Marko Milinković to convert from close-range. On 49 minutes, Oliver Práznovský headed a long overdue equaliser from Mário Almaský’s centre. But 20 minutes later, after more Ruža misses, Slovan’s Juraj Halenár showed how to finish, rattling home from a tight angle after being set up by Jiří Kladrubský’s pass.

Ladislav Šimčo, the Ruža coach, was incredulous after the game. ‘You don’t often see as many chances as that created against Slovan,’ he said, ‘and I’ve never seen us create so many in one game.’ His opposite number, Samuel Slovák, was typically honest in his assessment, admitting that ‘Ružomberok played very well and we needed a lot of luck’. Still, Slovan would appear to have the league’s best squad, and they now have a four-point cushion over their nearest rivals. If and when they start producing 90-minute performances, they could well run away with this season’s title. Sadly, the crowd of just 1,492 suggests that theBratislavapublic will take a little more convincing.

Referee Richard Trutz had a busy afternoon at the Žilina v Nitra game. The five yellow cards he waved atNitraplayers were rather less significant than the red shown to Žilina defender Jozef Piaček after 43 minutes. Piaček had wrestled Arnold Šimonek to the ground inside the penalty-area and, as he made for the dressing-room, Vratislav Gajdoš put Nitra ahead from the spot. The second-half hinged on two key incidents halfway through. First,Nitra’s Seydouba Soumah went on a Messi-esque slalom through the Žilina defence. His first effort was blocked by ‘keeper Martin Dúbravka who then somehow scrambled to his feet to tip Soumah’s header from the rebound over the bar. Play then switched to the other end, where Vladimír Leitner, who’d come on as a half-time sub to fill the gap left by Piaček, smashed home the equaliser from20 yards. One thing’s for sure ; there are few better 38-year-old goalscoring defenders around than Leitner. As for Trutz, he ought to have one or two questions to answer. Not about his handling of the game (most of his decisions were correct, including the sending-off) but about the fact that he allowed it to kick-off a full three minutes early.

Košice drew level on points with Žilina courtesy of a 1-0 home win over Banská Bystrica. The only goal arrived on the half-hour when Uroš Matič swung in a free-kick and Juraj Hovančík headed home. After the game, both coaches agreed that Košice had controlled the first-half, with Bystrica dominating the second. It was noticeable, however, that Bystrica never really troubled Darko Tofiloski in the home goal. Their scoring record, currently standing at seven from their eight matches, needs to improve if they are to challenge in the league’s top half. As for Košice, their perfect home record is stimulating a little local interest. 1,730, the crowd for the Bystrica game, is hardly a brilliant turnout but is a definite improvement on the sub-1,000 attendances they regularly recorded last season.

Followers of Spartak Myjava will also be growing in optimism after Saturday’s 2-0 win against visitors Prešov. Myjava were the better side throughout, but needed the 60th minute introduction of Michal Dian to add incisiveness to their superiority. Three minutes after coming on, he supplied the cross from which Peter Sládek broke the deadlock. Ten minutes later, the substitute himself curled home a left-footed shot from just outside the penalty area. Myjava coach Ladislav Hudec later commented on the post-match celebrations among the home fans. He can surely count on more good backing in two weeks time, when his team make the short trip to Trenčín. As for Prešov, their performance was insipid, but at least they can now put concerns over their away form to one side as their next fixture is also a local derby – at home to Košice.

The Senica v Trenčín game was largely a tale of two of the Corgoň Liga’s best goalscorers. After 74 minutes, Trenčín’s David Depetris, having been fouled in the box, made it double figures for the season from the penalty-spot. Almost immediately, though, Pavol Masaryk, scorer of 20 goals for Ružomberok in 2011/2012, rescued a point for Senica. The game then finished on a bad-tempered note as Senica’s Adam Varadi was sent off. The consensus between the coaches afterwards was that Trenčín had played the better football, further evidence, perhaps, that Senica are still struggling to cope with the changes to coaching and playing personnel that took place at the club over the summer.

Trnava’s hopes that successive draws at Žilina and Ružomberok might herald an upturn in their fortunes were dashed in emphatic fashion when they were thrashed 5-0 at home by Vion Zlaté Moravce in the Sunday fixture. Andrej Hodek scored a hat-trick for Vion, with Michal Škvarka and Lukáš Mihalík adding the other goals. The game was watched by a crowd of 3,912, easily the best of the weekend, but the Trnava public will not stand for results like this. Indeed, it is now difficult to see coach Pavel Hoftych holding onto his job. While Trnava are three points adrift at the bottom of the league, Vion are getting over a difficult start to the season and are reacquainting themselves with the calm surroundings of mid-table.