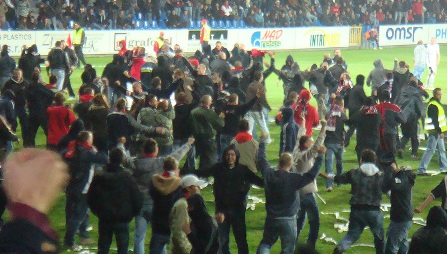 A fifth game without a win on Saturday would have effectively ended Slovan Bratislava’s hopes of retaining their Corgoň Liga title. If they could have hand-picked their opponents, however, they might well have gone for Vion Zlaté Moravce. Injury-hit, and freely admitting that the Slovak Cup is their priority, Vion looked unlikely to put up heroic resistance at Pasienky. And so it proved. First-half goals from Marko Milinković and Karel Mészáros, either side of a red card for the visitors’ Milan Pavlovič, ensured that Slovan had the points wrapped up by half-time. Roman Konečný’s 63rd minute volley completed the scoring. After the game, Vladimír Weiss continued in his contrary approach to press-conferences, which basically involves praising Slovan when they draw or lose and criticising them when they win. Here, he was dissatisfied with their efforts after Vion had gone down to ten men.

Two more cup semi-finalists, Senica and Banská Bystrica, served up a 0-0 draw so dire it even tried the patience of Senica coach Stanislav Griga, normally a connoisseur of low-scoring matches. ‘It was our worst performance of the season,’ said Griga, ‘even worse than when we lost at home to Košice. And that’s saying something.’

Nitra have had a decent spring, sorting out their home form and, for the most part, maintaining their impressive away record. On Saturday, they inflicted a fifth successive home defeat on Košice. Vratislav Gajdoš and Karel Kroupa scored well-taken goals to establish a 2-0 lead, and ensure that Peter Kavka’s deflected free-kick for the hosts in injury-time was nothing but an irrelevance. Meanwhile, Košice’s home crowds are becoming as poor as their results ; only 687 could be bothered to turn up.

Staying in eastern Slovakia, Prešov’s 1-1 draw with Ružomberok means they are now ten points clear of bottom side DAC Dunajská Streda and within just two of Košice. The scoring in this game was concluded inside the first 20 minutes. David Guba put the hosts ahead in only the 2nd minute, with Miroslav Poliaček equalising in the 19th.

As for DAC, they might have feared a hammering away to in-form Trenčín. In fact, they started well, and took the lead after 14 minutes through Tomáš Huber. Dzon Delarge missed a chance to make it 2-0 and there was then a sense of inevitability about Trenčín’s comeback, which resulted in goals for Filip Hlohovský and Lester Peltier. DAC battled on gamely, if unsuccessfully, and there was a nice touch at the end of the match when their players went over to share expressions of appreciation and sympathy with their tiny band of travelling fans. This mutual gesture could also be interpreted as an acceptance that relegation is now certain.  Indeed, it could be mathematically confirmed as early as next weekend.

The return legs of the cup semi-finals take place this Tuesday. Then, at the weekend, the title contenders all have games against mid-table sides, with Žilina facing a second trip to Bystrica in four days. Will they still be on course for a league and cup double after all that, I wonder?