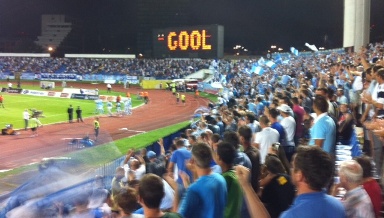 Slovan Bratislava should confirm their 2012/2013 title over the next 14 days or so, following Saturday’s 3-2 home win over closest pursuers Senica. Four successive draws had stalled Slovan’s momentum over recent weeks, allowing Senica to close the gap to six points. It’s now back to nine with just five rounds of fixtures left to play. The important action at Pasienky was confined to the second-half. Slovan’s goals were scored by Jiří Kladrubský,  Lester Peltier and Erik Grendel. Twice they were two goals clear, but substitute Rolando Blackburn reduced the deficit on each occasion. Slovan coach Samuel Slovák is refusing to celebrate, claiming that ‘there are difficult games still to play’. Opposite number Vladimír Koník, however, believes the race is over.

Vion Zlaté Moravce made the long journey to Košice and, to everyone’s surprise, earned their first victory of the spring. Andrej Hodek and Peter Orávik were the goalscorers, to the displeasure of Košice coach Ján Kozák. ‘For the first time since I returned the club, I have the feeling my players didn’t give me everything,’ he said. Vion’s Juraj Jarábek saw things slightly differently, suggesting that, at times, his team were kept in the game by goalkeeper Martin Kuciak.

The real excitement is at the bottom of the table. Trnava sacked coach Peter Zelenský during the week, appointing Vladimír Eckhardt in his place. Eckhardt could hardly have wished for a better start to his first game than the goal Ivan Schranz put past visiting Trenčín after just 3 minutes. Later, a dreadful mix-up between Peter Čögley and goalkeeper Miloš Volešák let in Martin Vyskočil for number two. Eckhardt felt Trenčín were the better team in the second-half, but was delighted with the result, which takes Trnava above Prešov on goal difference.

Prešov are the latest victims of Nitra’s tremendous run of form (five wins in six games), losing 1-0 at home to Jozef Vukušič’s team on Saturday. Peter Struhár scored the decisive goal after 55 minutes. Even bearing in mind the three-point deduction which will come into effect at the end of the season, Nitra now look reasonably safe. Prešov are anything but, as coach Jozef Bubenko hinted afterwards. ‘We’ve lost a very important game,’ he said. He will no doubt be aware that three of his team’s last five fixtures are away from home, a daunting prospect given their miserable record on the road.

Žilina fans have spent much of the spring wondering which is the bigger mystery ; their team’s complete loss of form, especially at home, or coach Štefan Tarkovič’s baffling selections and tactics. Things suddenly came right on Saturday, though, as visiting Ružomberok were sent back to Liptov on the wrong end of a 3-0 defeat. Long-range shooting appeared to be the key ; Jakub Paur and Michal Škvarka both hit beauties from outside the box, and Tomáš Majtan got a vital deflection to Stanislav Angelovič’s 25-yarder. The result is fairly meaningless in terms of the league, but should give Žilina confidence for Wednesday’s cup-final date with Slovan. ‘I’ll keep my fingers crossed for them,’ said Ruža coach Ladislav Šimčo.

Myjava christened their new floodlights with an 8pm kick-off against Banská Bystrica. By 10pm they were celebrating Ľubomír Urgela’s injury-time goal, which secured a vital 2-1 win. Earlier, Bystrica’s Marek Šovčik had equalised Peter Sládek’s strike. Myjava have done themselves proud all season and should be playing Corgoň Liga football again in 2013/2014. Bystrica, just three points clear of the bottom two, still have a little work to do to secure their status.