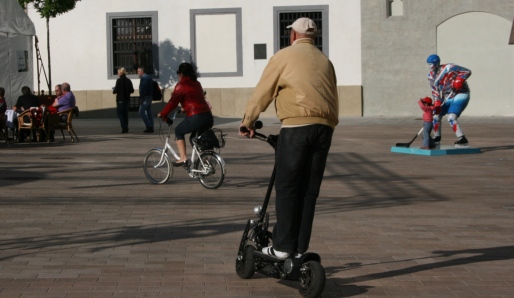 If you are one of those people who love the feeling of the wind through their hair, the changing coarseness and smoothness of the road and the danger and excitement of cars being mere millimeters away, then this is the sport, or trend, for you.

Cycling in the city is nothing like mountain biking in the Tatras or spinning in the gym, but something completely other.

Fixie, fixed gear cycling has become a trend, having been in action in the UK since before the 1950’s as it was the most suitable for time trials. These bikes have no freewheel, meaning they can’t cruise, the pedals are always turning whilst the bicycle is moving. This system of cycling is enthralling, exhilarating, entrapping and even dangerous, but only for those not accustomed to the particular style of riding. The sport is now finally making its tracks to the city of Bratislava. One has to pedal continuously, rather like spinning, meaning your speed, with just one gear, can be optimized to your full potential, while stopping is no easy task, but it does add to the excitement. With one front break to help and a solid back peddle to stop, you can gain a lot from your fixie.

Cycling is becoming more and more the preferred means of transport in and around town. If you are living in the city or the suburbs, it seems silly to drive 3km, spend 20 minutes looking for a parking place, and then when finding one you think is okay, still run the risk of being clamped. You then get drunk, catch a cab home and have to come to the city the following day to collect your car and end up nursing the hangover whilst waiting for the municipal police! NICE! Now that the city is about to launch its City Bike system, there is no excuse.

Many cycle projects are now starting up as people are getting more conscious of the environmental problems concerning us and how something can be done about them, and also how they can help. Besides our own bike couriers, which from my experience are faster than the cars in the traffic, others are also making a change.

One example is the BikeLab project organised by Orbis Institute Slovakia, which is a great example of how biking can make a difference. Drawing inspiration from, and being in contact with, the Magnificent Revolution, a group focusing on education and art projects based in the UK and Australia, the company really is trying to make the change.

Their concept on how to make a change is easy.

Electricity is produced by cycling, one is able to power sound, fans, music or small cinemas. They aim to power up a big cinema to be peddle-powered by 12-16 cyclists with a big screen and powerful sound. The next step would be to go to basic schools around the country with the green project initiative, where they would like to teach small children about other sources of energy and about electricity.

I vote for cycling!

For those of you who are already part of this underground culture, which is gearing into action and riddling our streets wheel by wheel, you should  get along to today’s monthly Critical Mass event. This month cyclists will be raising awareness for Earth Day and it is a sure way for you to get a new outlook of your city, the comrades around you and your bike. Don’t forget you will feel great about supporting a better future and your figure.

Critical Mass is an organization that has been in motion for 2 years in Bratislava and runs in over 300 cities around the world. The main objective of the movement is to improve conditions for cyclists in their respective towns and cities. It is held on the last Friday of every month and a group of cyclists, all shapes, sizes and attitudes, join this journey around the beautifully lit city of Bratislava, hundreds have been know to participate and enjoy the event.

So, if this all sounds appealing, grab your stead and ride on down to SNP  square in Bratislava city centre for 18:00.

For bike buyers the list of 2-wheeled wonders is infinite. Beside Fixie, bikes range from folding bikes for the bike and bus fundies, BMX, mountain bikes, tandems for the lovers or lazies, Racing bikes, Hybrid and trekking bikes and the list goes on. This is not a sport for everyone, but it is a good consideration as a form of transport and general well being.

Get your wheel and join the Critical mass crew now!