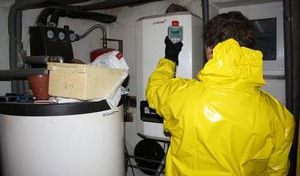 At a press conference today, police commissioner Jaroslav Spisiak, announced a successful Slovak-Czech police operation on an organised group that was planning to smuggle nuclear materials.

The group of six Slovaks and one Czech, led by a 71-yr old, was planning to smuggle a radioactive substance worth around half a million euros to either Slovakia or the Czech Republic.

Head of the Special investigations unit of the Attorney General’s Office, Peter Sufliarsky, refused to divulge what substance the crime concerned, saying only that it most likely originates from somewhere in the former Soviet Union.

The potential smugglers have been detained until sentencing, which could see them sit behind bars for up to ten years. The police had been aware of the group since 2009, but only started monitoring them in September 2011.

Spisiak noted how thanks also to his Czech colleagues they had managed to prevent the radioactive material from being brought into either country. Spisiak referred to the group as a kind of pensioners’ club, as all seven of the men were aged 52 to 71.