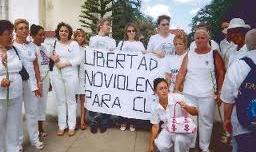 The Damas de Blanco (Ladies in White) from Cuba have been awarded the Jan Langos International Prize by the Jan Langos foundation, reports news portal webnoviny.sk. The movement has been fighting for the release of 75 political prisoners for the past seven years, with 11 still in prison.

The news was broken to the Damas de Blanco movement by the Slovak ambassador to Cuba, Zdeno Rozhold, while PM Iveta Radicova and other dignitaries attended the official ceremony in Bratislava.

Foreign affairs minister Mikulas Dzurinda expressed the country’s support for defenders of human rights in what he called ‘oppressive’ regimes liked Cuba, pointing to the increasing role women are playing in the human rights effort in the world.