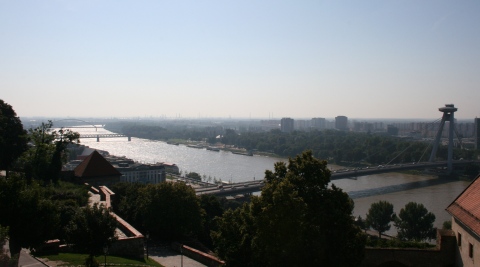 The Danube Strategy, aimed at boosting the development of the Danube region, was proposed by the European Commission on 9 December 2010 and then given the final thumbs up this month, but the ten countries that are taking part are still trying to find the right forms of co-operation.

Last week following a meeting with Budapest mayor Istvan Tarlos, mayor of Bratislava Milan Ftacnik said he would like to see Vienna, Budapest and Bratislava co-ordinate their steps more in preparation for implementing the Strategy.

Ftacnik underlined the importance of the Strategy and of improving relations between the Slovak and Hungarian capitals, in particular, saying that to reap the full benefits of the programme cities had to know what the others were doing. The two mayors agreed to organise a Bratislava Week in Budapest and vice-versa.

Slovak foreign minister Mikulas Dzurinda joined his Austrian counterpart Michael Sindelegger to show their support for the Danube Strategy by taking a bike ride together from Berg in Austria, through Bratislava to Rajka in Hungary. They were supposed to be joined by Hungarian foreign minister Janos Martonyi, but he cancelled due to work commitments.

The region is facing several challenges:

Better coordination and cooperation between the countries and regions is needed to address these challenges, which is the main premise of the Danube Strategy.

The 115 million people living in the Danube Region will benefit from:

Although the strategy will not come with extra EU finance, a considerable amount of funding is already available to the region through a host of EU programmes. For instance, EUR 100 billion alone has been allocated from the cohesion policy (European Regional Development Fund, Cohesion Fund, European Social Fund) between 2007 and 2013. Moreover, 41 Territorial Cooperation programmes cover a geographical area including the Danube Region.

The aim is to use this available support to greater effect and show how macro-regional cooperation can help tackle local problems.