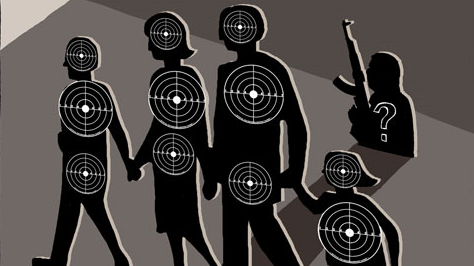 Regarding the mass shooting that took place today just after 10 am in Devinska Nova Ves, Bratislava,  interior minister Daniel Lipsic and police chief Jaroslav Spisiak have now held a press conference on site to provide more detailed information about this sad day in Slovak history.

The story is still unfolding, but chief of police Jaroslav Spisiak informed that the perpetrator had entered a flat armed with a Vz.58 automatic rifle (which is illegal to possess) and other firearms, including 8 full magazines and other ammunition, where he then shot 4 women and 1 man dead. On leaving the block of flats he came across a relative of those who had been shot, and killed him as well. The shooter, still unnamed, was a man around his 50s. He was even wearing earmuffs against the noise, and as Spisiak said, he started shooting at “everything that moved”.

The first patrol car was at the crime scene within 2 minutes of receiving the emergency call from a neighbour, and so confronted the man. He then started shooting wildly in the street. Other patrol cars arrived within a few minutes, soon followed by an army of special forces, who together managed to corner the man so that he had no escape. This is probably why he decided in the end to take his own life as well, taking the death toll so far to 7.

In the mayhem, at least another 15 people were injured, including a police officer, whose condition is now stable. Another of those injured was a 3-yr old boy, who was in the car with his parents when shots blasted through their car window. The boy had only surface injuries. At present 9 people have been hospitalised, 1 of which is in a critical condition.

The police will not divulge detailed information yet about the shooter until the investigation becomes clearer and they are sure of the details. Interior minister Lipsic even said that at present they are still not totally sure of the identities of the people killed in the flat, and so instead of feeding the media with speculative information, they would prefer to wait till they have a full picture.

As the dead family is allegedly of Roma ethnicity, there are speculations that it is some vendetta between gangs, but so far nothing has proven these theories.

In response to the complaints of the media blackout during the incident, Lipsic said that having people moving around in such a dangerous zone was wrong, and so holding out on the media was the right thing to do. He said that saving lives came first, and providing information second.

After sending his condolences to the families of the victims, Lipsic informed that they are providing the families of those caught up in the shootout with professional psychological support. Lipsic also spoke about the need to crack down harder on crime and to teach the police to deal with these kinds of situations. He said they will start concentrating on crime hot spots more or innocent people will be at risk.

These kinds of events might happen on a regular basis in the U.S., but in Europe there have only been 4 such incidents in the past five years. The rise of shooting incidents over the past few months in Slovakia, though, is pretty alarming, and so we have to ask ourselves if it is only a sign of the times, or a progressive decline of human nature and society.