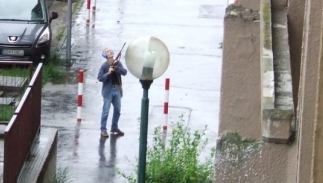 According to the latest autopsy report, the infamous gunman of the Devinska Nova Ves shooting on 30 August 2010, Lubomir Harman, was drugged up when he took the lives of seven innocent victims.

Spokesman for the Ministry of Interior, Gabor Grendel, informed SITA newswire about the latest finding today. Grendel explained: “The official appraisal shows that at the time of the shooting he was in a state of inebriation”, adding that he showed 0.5 ppt of ethanol in his blood.

This shows that he had consumed some kind of acetone before the tragedy, in addition to alcohol. There is therefore a suspicion that he may have been sniffing something as well as drinking, as it gets into the body through inhalation.

The Ministry of Interior also confirmed with the autopsy that the gunshot of a police officer would have proven fatal if Harman had not turned the gun on himself anyway. Interior minister Daniel Lipsic pointed to this fact as an argument for arming the police force with Vz. 58 sub-machine guns.

A film about the event opened in Slovak cinemas last week and is being met with mixed reactions. Some say it is all in bad taste, while the neighbours of the gunman are claiming that the film gives a false representation of the situation and the events of that fateful day.

For more information on the shooting from last August, click here.