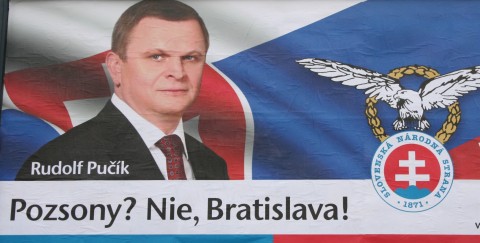 Does fresh Hungarian PM Orban have illusions of rekindling the Kingdom of Hungary or is it just a ploy to make sure he has ‘appropriate’ opponents across the Danube? His latest move on Monday announcing the ‘death’ of the Kingdom of Hungary (by the signing of the Treaty of Trianon) as a Day of National ‘Cohesion’, is seen by the Slovaks as yet another provocation across the Danube, and one which the nationalist SNS party, among others, is only too happy to retaliate about. The two recent laws passed in Hungary are shaking up the pre-election polls and look set to have a serious impact on the election results, and so the whole future of the Slovak Republic.

Orban’s government seems determined to generate popularity and nationalist tendencies at home to the detriment of security in the region. The deliberate throwing of petrol on the already inflamed situation caused by the recently adopted dual citizenship law, which Slovakia promptly reacted to by passing counter legislation, will probably not be the last swing Hungary will take at its Slovak neighbour. The Slovak government’s immediate reaction of passing a law that will deprive any Slovak citizen of various rights should they request Hungarian citizenship, has effectively blocked the effect of the Hungarian law. Or has it? Only time will tell just what this will mean on a practical level and what the repercussions will be, but one thing is for sure, more than one spanner has been thrown into the diplomatic works between the two countries in the past two weeks, and with such arrogant and unflinching stances on both sides of the border, anything could happen.