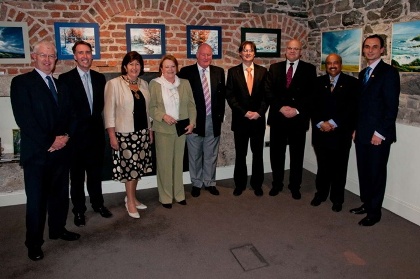 Dublin will be host to Slovak Cultural Week after the event was officially opened on Friday in the presence of various officials from Ireland and Slovakia, including Slovak ambassador to Ireland, Roman Buzek and Dublin deputy mayor Eddie Wynne.

The Slovak Cultural Week is organised by the Slovak Centre – Ireland, which is officially recognised and registered non-profit, politically independent, community organisation established in February 2007 by a group of Slovak volunteers in Ireland.

The focal point of Slovak Cultural Week is an exhibition of Slovak artists living in Ireland. There will be exhibitions from Ms. Lucia Blizniakova, Mr. Roman Burgan and members of the photography club Irsko.Fotoklub. Every evening during Slovak Cultural Week will offer the chance to get a genuine experience of true Slovakia and every visitor will get a chance to join in and share a piece of Slovakia in Ireland.

The event promotes Slovakia, its culture and gives an insight into the lives of some of the 25,000 Slovaks who now live in Ireland. Visitors can also enjoy some Slovak wines, watch a Slovak film (Tango with Mosquitos) a performance by a folklore group and much more.