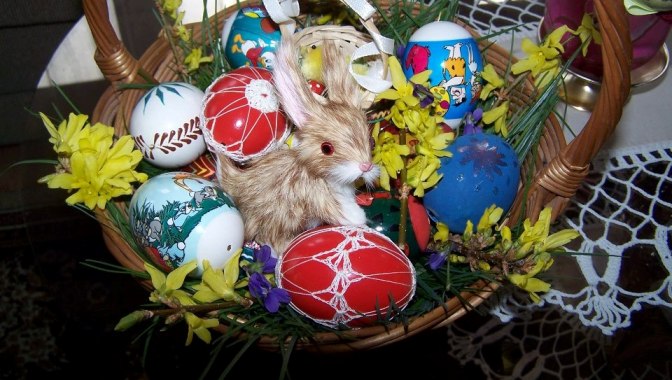 In pre-Christian times, one of the biggest celebrations was the welcoming of spring. It meant the victory of life over death. For the Christians, one of the most important event of the year is Easter, when they commemorate the Crucifixion, death and resurrection of Jesus Christ. Since Slovakia is a Christian country, but also with pagan roots, Easter today is exactly a combination of these two traditions. It is preceded by a long period (40 days) of lent.

The Holy Week (which here is called ‘Big Week’ by Slovaks) begins with Palm Sunday (for Slovaks ‘Floral Sunday’), when we remember Jesus’ entry to Jerusalem. People threw palms at the feet of Jesus, and therefore it is called Palm Sunday. The name was changed in this area probably because we do not have palm trees, or also because of the fact that in this period the first spring flowers appear.

There isn’t a clear explanation for the name of Green Thursday, either. Maybe it received its name after the green of the Gethsemanegarden, where Jesus was praying and where the soldiers arrested him. This day is important for the Last Supper of Jesus with his apostles. 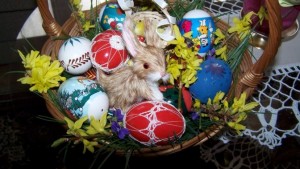 On Good Friday (or ‘Big Friday’ for Slovaks) Christian people commemorate the death of Christ on the Cross. He was crucified on Mount Golgotha by the Emperor Tiberius and Pontius Pilate. On this day, masses are not held in Catholic churches, the altars are without blankets, crosses and candle-holders, while fasting is complied with rigorously.

White Saturday commemorates the burial of Christ in the tomb. With this day, fasting ends, and the bells start ringing again, what we haven’t heard since Thursday. Finally, Easter Sunday comes: the biggest festival of the liturgical year, which celebrates the resurrection of the son of God and his victory over death. This gives hopes to all who believe in Jesus to reach eternal life.

The symbols of Easter are:

– The cross – it’s the most important Christian symbol because Christ was condemned to die on the cross. After the Resurrection of Jesus, the cross became a symbol of hope.

– Eggs – the egg is considered a symbol of new life and fertility. It’s the change of the inert state into life. It symbolizes Resurrection.

– The lamb – has an important role in Christianity as well. According to faith, Jesus is the Lamb of God sacrificed to save the world.

– The rabbit – this symbol probably has its origin in the pagan world. It stands for the rebirth of nature.

The customs of Easter Monday

On Easter Monday, in contrast to the Holy Week, the main role is played by the customs of pagan origin: watering women, beating them with whips, and giving decorated eggs. It is a day of joy, for gatherings of families and friends, and eating abundantly.

Easter eggs appeared in the Middle Ages. The tax was paid with eggs, chickens or rabbits, especially in the Easter period, because it was this time after winter when the first eggs appeared. By painting them, people expressed their joy over the arrival of spring. Originally Easter eggs were only red, because people attributed a protective power to this colour. It also symbolized the blood of Christ. Later, people started using other colors, obtained from different plants, as well, and decorated eggs with various drawings.

The typical custom of Slovakia(and also from the neighboring countries such as Hungary and the Czech Republic) was that, on Monday, men and boys dressed elegantly or in traditional costumes and visitied women. They poured cold water on them or bathed them in the river, and beat them with whips, while singing or reciting poems. The whips were prepared usually by the boys themselves with rattan sticks and decorated with colorful ribbons. The aim of ‘oblievačka’ (water pouring) and ‘šibačka’ (beating with whips) was to make sure that the girls remained beautiful and healthy all year round. In exchange, they gave the boys decorated eggs (kraslice), also prepared by themselves and invited them to eat and drink.

Today, the Easter holidays are more commercialized. The water was replaced by perfumes, hand-decorated eggs gave way to chocolate rabbits and eggs, or rather to money, and on the festivities, alcoholic drinks predominate. The folk customs are still alive in some towns in Slovakia. But still, Easter Monday is a good opportunity for family members and friends to gather and maintain the customs of the past.