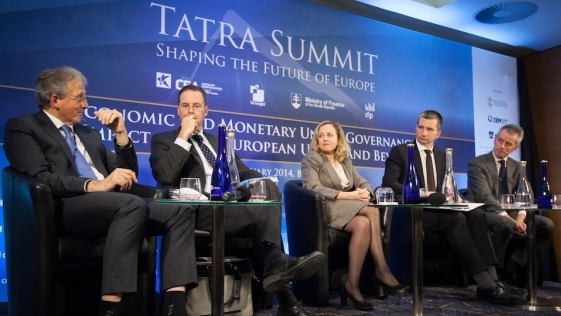 The third edition of TATRA SUMMIT focused on several key topics such as economic growth, new investments and innovation strategies, priorities of the new European Commission, regaining trust in the EU and finally the new Energy Union.

The conference was innovative in its approach because it did not focus on roots and consequences of the crisis in the EU but it discussed solutions and initiatives and explicitly accentuated the growth agenda. The debates have confirmed that there are efforts to look for various growth stimuli without a negative impact on consolidation of public finances. Speakers have also rejected bending and redefining agreed rules that could jeopardise trust in stability of financial markets as well as trust of European citizens.

Actual innovative contributions to the topics of the conference included a meeting of the EU Task Force that is preparing a pipeline of projects for supporting investments in the EU with senior representatives of financial companies, investment groups and sponsors of the project.

The TATRA SUMMIT was also used as a platform for presenting the Slovak Investment Holding, which is a new innovative tool merging public and private resources in order to support investments in Slovakia. The investments will be aimed mostly as infrastructure, innovation and research, digital economy and energy. It will combine about 420 million euros from the European structural and investment funds with private investments.

Jӧrg Asmussen, Permanent State Secretary at the German Ministry of Labour and Social Affairs, has said that the TATRA SUMMIT has a potential to become a forum for generating Central European ideas for the future of European integration. George Zavvos, the first European Commission Ambassador to Slovakia, sees the TATRA SUMMIT as a Central European version of the Davos conference. This call has resonated among the guests.

He believes that the investment package has to be considered together with two other pillars of the economic strategy – structural reforms and strengthening fiscal credibility.

Carsten Pillath, Director General for Economic Affairs and Competitiveness at the Council of the EU, has pointed out that the EC investment programme accounts only for 0.8 per cent of the EU’s GDP, so its real added value will be in becoming a catalyst for private investments.

According to Director General for Economic Policy and Financial Markets at the Austrian Ministry of Finance, Harald Waiglein, the investment package may lead to a temporary increase of the nominal GDP but we have to think about increasing the potential GDP. The recipe could be the finalisation of the single market and the support for digital economy, said Mr. Waiglein.

Growth vs. consolidation: Stability and Growth Pact and its flexibility

Prime Minister of Slovakia, Robert Fico, has said that in response to the crisis the Eurozone agreed on certain principles and rules but not all member states have learned the lesson and some are not willing to follow the rules. Mr. Fico has warned that we should not repeat the same mistake just because forecasts show positive figures.

Jӧrg Asmussen has pointed out that the Pact is already sufficiently flexible and any attempts at its re-evaluation are seen negatively by financial markets. Former Italian Prime Minister, Enrico Letta, has said that it is impossible to achieve healthy economic growth at the expense of healthy fiscal management.

Regaining trust in EU project and its future

Former Vice-President of the European Commission, Günter Verheugen, has criticised European leaders, among them German Chancellor Angela Merkel, for a lack of vision. Mr. Verheugen believes politics is not about copying trends from opinion polls but its active forming. Enrico Letta has said that the EU will regain trust of its citizens only if it provides its citizens with real opportunities.

The project of the EU energy union was outlined by Vice-President of the European Commission for Energy Union, Maroš Šefčovič. He has said that the conception of the Energy Union should be presented in January 2015. Subsequently, work on the action plan and defining concrete infrastructure projects will get under way.