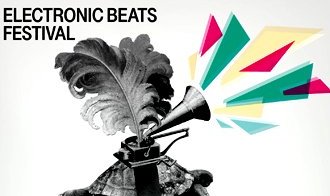 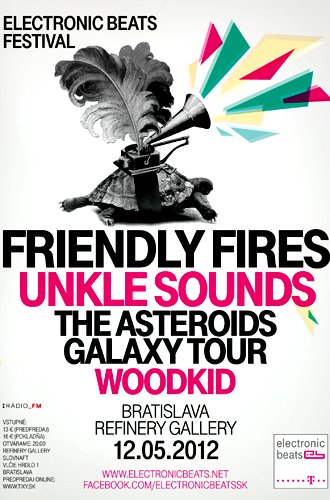 On 12 May Bratislava will host the Electronic Beats Festival for the 4th time. The spring edition will take place in the brand new Refinery Gallery, which has been renovated by Slovnaft and Design Factory to bring a new cultural function to the clearly industrial area. The line up is extremely attractive : Slovak locals Zlokot, the spaced-out Asteroid Galaxy Tour, the special audiovisual show UNKLE Sounds. The night is topped off with performances by the talented young French  Woodkid and the amazing headliners Friendly Fires.

Zlokot has been performing  since October 2011 and is formed of Slovak artists from different bands like Noise Cut, Got Blue Balls, Nourish My Fame and Lyrik. Looks interesting and a definite good start to the night (watch video).

Asteroid Galaxy Tour is a Danish duo formed by Lars Iversen and charismatic singer Mette Lindberg (watch video). They  appeared on the music scene in 2008 when they attracted attention with the single“ The Sun Ain’t Shining No More“, interesting especially thanks to the psychedelic effects. When performing live the band extends to a six-piece with horn section. They played before Amy’s Winehouse concert in Copenhagen.

UNKLE Sounds is James Lavelle’s new project (watch video). It is basically a music show presenting videos and remixes from Unkle on a special LED screen with a unique visual show created by Dough Foster. The British project Unkle (created by James Lavelle in 1994) is one of the best to ever have appeared on the electronic music scene. It is a mixture of downtempo, hip hop and rock completed by deep meaningful lyrics.

Woodkid  aka Yoann Lemoine was until now respected music video director making videos for Katy Perry or the Mystery Jets. He has become an alternative indie musician and started to perform on  stage since his last EP  “Iron” released in March 2011. His music oscillates between avant-garde folk and chamber pop. We are looking forward to seeing this songwriter with hypnotising voice and a great visual show on stage. The proof is in this great video produced by the artist himself.

Friendly Fires from St. Albans in Hertfordshire in England will perform in Slovakia for the 2nd time. We’ve already had the oportunity to dance to their indie disco music at the Pohoda Festival. After the 2nd release from last year called “Pala” they defintelly belong to the best that this genre offers. They are influenced by the famous German record label Kompakt, the king of techno music Carl Craig and Mr. of styles Prince. This mixture makes their music accessible not only to funky lovers, but also to fans of the underground electronic music (watch video).